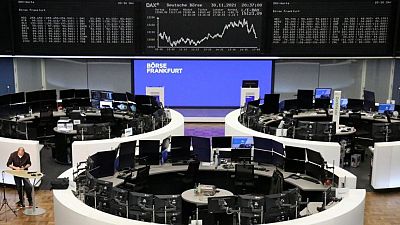 -European shares fell on Friday, hitting session lows after a downturn in U.S. stocks on a tech slide and fears around the Omicron coronavirus variant hitting economic recovery.

The pan-European STOXX 600 erased morning gains to close down 0.6% after swinging between losses and gains all week on worries over the potential impact of the newly detected variant, and the U.S. Federal Reserve’s recent hawkish turn.

“The next couple of weeks will remain volatile as the focus falls on the latest (U.S.) inflation report, the December 15th FOMC meeting, and further clarity on the impact with the Omicron variant,” said Edward Moya, senior market analyst at Oanda.

Data this week showed inflation in Europe surged, with Germany’s hitting highest in decades. But the European Central bank has maintained its ‘transitory’ inflation stance. The ECB may set policy for a relatively short period at this month’s meeting given heightened uncertainty, President Christine Lagarde told Reuters.

IHS Markit’s survey showed euro zone business activity accelerated last month, but the bounce may be temporary as demand growth weakened and fears about the Omicron variant put a dent in optimism.

Basic resources sector lost the most in Europe on Friday, down 2.5% as copper and iron ore prices eased, while tech stocks tracked U.S. peers lower.

Oil stocks rose as crude prices climbed after OPEC+ said it was poised to act if demand weakens, and was the only sector in the black for the day. [O/R]

Among individual stocks, Dassault Aviation surged 6.5% to the top of the STOXX 600 after France sealed a deal for 80 Rafale warplanes with the United Arab Emirates – the largest order ever for the warplane.