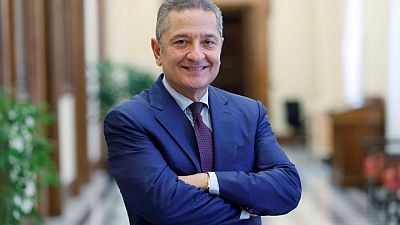 FRANKFURT -Euro zone inflation remains temporary, two key European Central Bank policymakers argued on Thursday, even as U.S. officials made the case this week for abandoning the use of “transitory “ to describe what have proven to be persistent price pressures.

Inflation in the 19-country currency bloc hit a record high 4.9% last month and is likely to stay above the ECB‘s 2% target in 2022 but the bank has long argued that price pressure will abate on its own.

“The current inflation spike is temporary and driven largely by supply factors,” ECB board member Fabio Panetta told a conference. “Central banks should have the patience to look through these effects and explain their policies to the people.”

Some conservative policymakers and market economists increasingly doubt this narrative, warning that price pressures, even if temporary, affect wage setting and will drive up underlying prices.

The debate is especially relevant as the ECB gears up for a crucial meeting on Dec. 16 when it is likely to end a pandemic emergency support scheme but may ramp up other support measures to pick up the slack.

“I do recognise that the micro experience of our citizens at the fuel pump is quite difference from the macro reading of economists and central bankers,” Rehn told the same conference.

“Still, in our view, euro area inflation is mostly transitory… even if some of its components will probably prevail longer over the next year than previously expected,” he added.