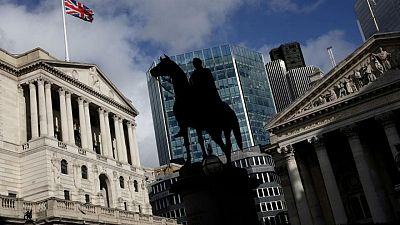 LONDON – A key measure of medium-term British inflation expectations in financial markets hit its highest since at least late 2013 on Thursday, potentially adding to worries at the Bank of England.

Five-year five-year inflation forwards – which measure investors’ expectation for retail price inflation over the next five to 10 years – peaked at 4.0364%, the highest RPI rate since the data series from Refinitiv began in October 2013.

Headline RPI, which determines the return on British index-linked gilts, hit a 30-year high of 6.0% in October, while consumer price inflation – the measure targeted by the BoE – reached a 10-year high of 4.2%.

The BoE has said it expects to have to raise interest rates over the coming months, in part to ensure that the surge in inflation, caused mostly by higher energy prices and COVID-related supply chain problems, does not become entrenched in higher medium-term inflation expectations.

The British central bank is due to announce on Dec. 16 whether it has raised rates or kept them at their all-time low of 0.1%. Markets priced in a 51% chance of a rise to 0.25% late on Thursday.

U.S. Federal Reserve Chair Jerome Powell said on Tuesday that it was no longer helpful to describe inflation pressures as “transitory”.

Other market measures of British inflation expectations reached new highs too on Thursday.

The break-even inflation rate on five-year index-linked gilts – which measures the average rate of RPI needed for them to outperform conventional gilts – hit 4.68%, on track for its highest close since at least the start of 2010.

While break-even rates give a clear sense of the trend in inflation expectations, they may also reflect broader market factors, such as a big reduction in the number of bond auctions announced after October’s budget statement.