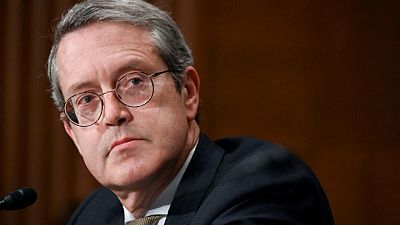 Quarles, who will leave the Fed’s Board of Governors at the end of the month, said regulators must show “reasoned constraint” on monitoring stablecoins, which are digital currencies whose value are pegged to traditional assets like the dollar. He added that banks should be allowed to engage with them once certain concerns around transparency, stability and consumer protection are met.

“It is clear that there is a strong demand for these assets among bank customers, and well-regulated banks should be allowed to engage in activities regarding these assets,” he said in a virtual appearance at an American Enterprise Institute event in Washington.

Quarles specifically cited a recommendation that any stablecoin issuers or “wallet providers” have limited access to other commercial entities, calling it needlessly stricter than rules for nondigital assets.

The President’s Working Group on Financial Markets published a report in November calling on Congress to pass a new law to apply bank-like scrutiny to stablecoin providers.

In his final speech at the Fed, Quarles laid out a series of recommendations for the central bank following his exit. President Joe Biden has yet to nominate his replacement.

He said the Fed’s plan to finalize those new rules would come after his exit from the U.S. central bank, and said there will be “little justification” for keeping the G-SIB surcharge at its current high level once it’s done.

He also argued the Fed should consider averaging the results of its annual stress test of bank finances over several years to result in a more consistent capital level, and that the central bank needs to address “perverse implications” of current leverage requirements that could discourage banks from holding safe assets in times of stress.