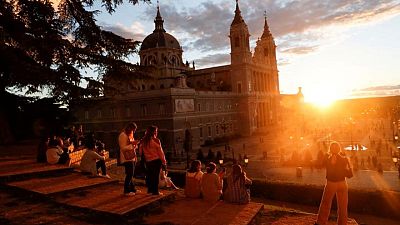 MADRID – The number of people registering as jobless in Spain fell 2.28% in November from October, or by 74,381 people, as unemployment reached pre-pandemic levels with 3.18 million people out of work, the Labour Ministry said on Thursday.

The data marks the ninth consecutive month of falling jobless figures and the lowest unemployment figure for November since 2008, the ministry said.

Spain added 109,451 net jobs over the month, while some 125,632 people were still enrolled in the state supported furlough scheme, 39,992 fewer than a month earlier, separate data from the Social Security Ministry showed.

This has brought the number of registered workers to 19.77 million, a record high for the Spanish labour market, according to the ministry.

Spain has experienced strong employment growth so far in the second half of the year, thanks to the containment of the pandemic in a country with one of the highest vaccination rates in the world.

Although tourism data is still far from pre-pandemic levels, the autumn is proving to be good for activity in the sector, where more than 30,000 jobs were created in catering alone.

Infection figures in Spain are on the rise, in what could be the sixth wave of the pandemic, but so far the government has not imposed new restrictions.