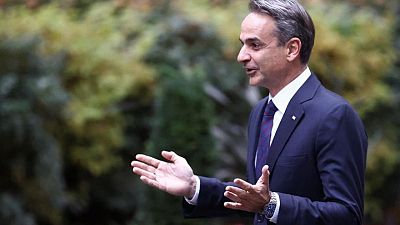 ATHENS -Prime Minister Kyriakos Mitsotakis said the Greek economy could grow more than projected next year, saying he was “very bullish” about prospects for the economy and a successful tourism season unless there are further big complications from COVID-19.

Greece’s economy attracts particular scrutiny after a decade of financial turmoil which saw the nation of 11 million people almost topple out of the euro zone as recently as 2015.

Asked during an interview at the Reuters Next conference on Wednesday whether authorities were sticking to their 4.5 percent growth forecast for 2022, Mitsotakis said: “It could even be higher than that.

“Assuming there is no major hiccups with the pandemic, assuming that the pandemic is gradually going to come to an end during the first six months of 2022, I’m very bullish about the prospects of the Greek economy.”

He said he looked forward to another successful year for the vital tourism sector in 2022 after arrivals this year made up ground lost during the coronavirus lockdowns of 2020. Tourism represents about a fifth of Greece’s economy.

Greece has fared relatively better than other European nations during the pandemic, but a recent spike in infections led authorities on Tuesday to order mandatory vaccinations for those aged over 60.

“It is the older unvaccinated people who are in serious risk of ending up in an ICU bed, or possibly even lose their lives. So we think … (this) is a proportionate response,” the prime minister said.

Mitsotakis, whose conservative New Democracy party came to power in 2019, after four years of sometimes tumultuous government by leftist rival Syriza, said: “If you look at the big picture, Greece of 2021 has no comparison with Greece of 2011, or even 2015.

“This is a country that has put its public finances in order.”

The Greek economy contracted 9% last year but the rebound in tourist arrivals will help it grow more than 7% this year, Mitsotakis said, adding: “We have already made up all the lost ground from the pandemic.”

Greece required three international bailouts from 2010 to 2015, together worth more than 260 billion euros. It returned to international markets in 2017, but its sovereign paper is still considered “speculative” by credit rating agencies.

Mitsotakis said he expected the country’s ratings to be returned to investment grade “at the latest” by early 2023.

Greece is running big deficits as a result of the pandemic, but Mitsotakis said that was to be expected and that the government had plans to restore the public finances to a sounder footing. He noted that COVID-19 and recent financial crises had also prompted a rethink of European Union fiscal rules.

“We have a very clear plan regarding how to return towards fiscal sustainability,” Mitsotakis said.

To watch the Reuters  Next conference please register here https://reutersevents.com/events/next/