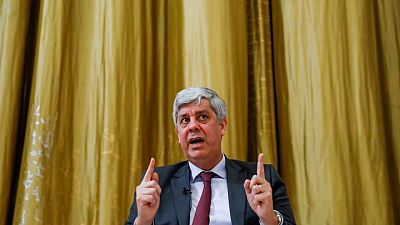 LISBON – Portugal, which is gearing up for a snap election on Jan. 30, must take advantage of European Union recovery grants to support growth and resume pre-pandemic reductions of its high debt, Bank of Portugal Governor Mario Centeno warned on Monday.

He said the EU’s pandemic recovery plan “makes public and private investments viable without burdening public accounts in the short term”, but the period for the implementation of such projects is relatively short, until 2026.

“To lose this opportunity is to waste the most relevant moment of the European integration since the creation of the euro,” he told an economic conference.

The former finance minister also warned that failure to resume the course of public debt cuts, supported by a credible fiscal consolidation plan, “would be unforgivable”.

Finance Minister Joao Leao said two weeks ago that the government had mechanisms to rapidly implement the EU recovery plan in the absence of a new budget and kept the 5.5% growth target for 2022.

Portugal plans to use 3 billion euros ($3.38 billion) in grants to finance investments in digital and environmental projects in 2022, out of 13.9 billion euros it should get though 2026.

Planning Minister Nelson de Souza, who oversees the implementation of the programme, said on Monday that “the plan is following its normal course, the investments are contracted with the EU and the financial means and legal conditions are available.

“Until next government takes office, I don’t foresee any big difficulties … beyond that it will be up to the next government,” he told the same conference.