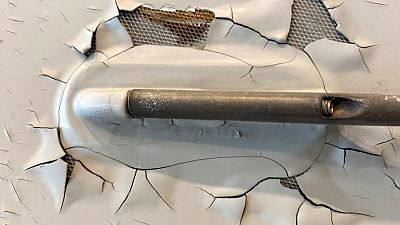 DUBAI – A dispute between Airbus and Qatar Airways over paint and surface flaws on A350 jets stretches beyond the Gulf, with at least five other airlines raising concerns since the high-tech model entered service, according to documents seen by Reuters and several people with direct knowledge of the matter.

Qatar’s national carrier has grounded 20 of its 53 A350s, saying it is acting on orders from its local regulator, until reasons for what witnesses describe as the blistered and pock-marked appearance of some of its A350s can be confirmed.

Airbus says there is no risk to the A350‘s safety – a point echoed by the other airlines, which have not grounded any jets and describe the issue as “cosmetic.”

The planemaker said in response to queries from Reuters there had been some problems with “early surface wear” that in some cases had made visible a sub-layer of mesh designed to absorb lightning, which it is working to fix.

Three people with direct knowledge of the situation said that at Qatar Airways and at least one other airline the mesh had in some instances itself developed gaps, leaving the carbon-fibre fuselage exposed to possible weather or other damage.

The A350, in service since 2015, is designed with ample protection to resist storms and is deployed around the world with high reliability, Airbus said in an emailed statement.

Asked about gaps in the mesh, it said some airlines were subject to higher swings in temperatures than others, apparently referring, for example, to desert conditions in Qatar.

Qatar Airways has called for a definitive cause to be identified and a permanent fix that satisfies its regulator. The Qatar Civil Aviation Authority declined to comment.

Two people familiar with the grounding decision said it was based on ongoing uncertainty over the cause and impact of surface degradation and gaps in lightning protection.

Airbus says it has found a root cause, but sources with two affected airlines said they had not been notified of one.

The row has set the clock ticking on a compensation battle that sources said could be worth hundreds of millions of dollars after Qatar Airways halted deliveries of 23 more A350s on order.

The clash between two of aviation’s most powerful players became public in May, six months after Qatar Airways sent an A350 to be stripped and repainted in special livery for the FIFA World Cup to be held in the Gulf state next year.

But what for months had been widely presented as an isolated issue related to Qatar’s severe heat is more widespread, according to a private maintenance message board used by Airbus and A350 operators and reviewed by Reuters.

Messages show Finnair, which operates in the colder north, raised paint concerns as early as 2016, and reported in October 2019 that damage had spread below to the anti-lightning mesh.

Finnair, Cathay Pacific and Lufthansa confirmed some of their A350s had suffered what they described as cosmetic damage. Air Caraibes said it and sister airline French Bee had seen “no major paint problems,” and especially none regarding safety. Air France said its own A350s had operated normally since it began flying them in 2021 and declined to comment on Air Caraibes. Etihad declined to comment.

To be sure, Qatar Airways has had disputes with suppliers in the past before reaching compromise deals. Its CEO Akbar Al Baker has periodically criticised both Airbus and U.S. rival Boeing over perceived manufacturing and strategy errors.

Analysts say the dispute coincides with efforts by many airlines to reduce their exposure to long-haul jets following the pandemic. Gulf industry sources deny commercial motives for the grounding, noting Qatar badly needs jets for the World Cup.

Airbus is also not alone in facing problems. Boeing has had paint issues and a phenomenon known as rivet rash, or flecks of missing paint, on its competing 787s. A spokesperson said it was not safety-related and was being resolved.

However, the unusual partial grounding by Qatar comes at a sensitive time for Airbus as it races to meet an end-year delivery target and as Qatar Airways studies offers from Boeing https://www.reuters.com/business/aerospace-defense/qatar-airways-expects-take-delivery-boeing-777x-aircraft-2023-ceo-2021-11-17 to replace a fleet of 34 freighters.

In October 2016, a year after becoming the A350‘s first European operator, Finnair reported paint damage, according to the message board. It later complained “paint is in very bad condition.”

In one posting, it disclosed that problems had been found on an A350 just two weeks after delivery.

“We can confirm that we have experienced some issues with A350 painting, and have been working together with … Airbus to solve these issues,” a Finnair spokesperson said, adding the problem was “cosmetic, but naturally unfortunate.”

Cathay Pacific confirmed some of its A350s had experienced “to some extent cosmetic deterioration.” The issue has been fully investigated and there is no safety impact, it said.

By October 2017, the messages show, Lufthansa had also found areas of peeling, some spanning more than a square metre.

Lufthansa said occasional cosmetic defects had been corrected and that safety had never been affected.

Paint has played a major branding and diplomatic role in the jet age, projecting the image of airlines and nations across the world. But a switch to new lightweight jets brought a hitch.

When Airbus 15 years ago launched the A350, it chose to follow Boeing’s new 787 in using carbon-fibre instead of metal.

Experts say the lighter jets consume less fuel but are harder to deck out in a way that makes paint stick.

The new jets also need a layer of metallic mesh to dissipate lightning strikes because carbon-fibre is not conductive.

Finally, unlike metal, carbon does not expand and shrink as temperatures change. Yet paint does, resulting in a tug of war between plane and paint that can cause peeling over time.

Problems reported by Qatar Airways and some – though far from all – other A350 operators suggest this is happening earlier than expected, two people familiar with the design said.

The problem may have been compounded by the paint’s especially weak adhesion to titanium rivets, they added.

Some industry experts have questioned whether other manufacturing flaws may also have contributed to the problem.

Pictures submitted on the message board by Finnair in 2019, seen by Reuters, appear to show corroded or missing mesh known as Expanded Copper Foil. Finnair and Airbus declined to comment on the photos, but Airbus officials said that particular problem may have stemmed from an early production issue, since resolved.

“We have seen no effect on the structure of the aircraft and operators continue to fly with high levels of operational reliability,” A350 Chief Engineer Miguel Angel LLorca Sanz said of the broader paint issue.

“This is not at all affecting the lightning strike protection due to the substantial (safety) margins … It is not at all an airworthiness issue,” he said in an interview.

Airbus confirmed it is one option under review.

That still leaves a war of words over existing planes sitting idle with their windows taped up in Qatar.

Photographs obtained by Reuters show cracked or missing paint and exposed or corroded lightning protection on at least two of the jets.

Now regulators must try to break an impasse over whether that kind of damage is within the allowable margins for dealing with lightning, which Airbus insists would still wash safely over the jet. That in turn may determine whether compensation clauses will be triggered.

While European regulators have said there is no evidence of safety risk, Qatar is pressing for deeper analysis and shows no immediate signs of backing down.