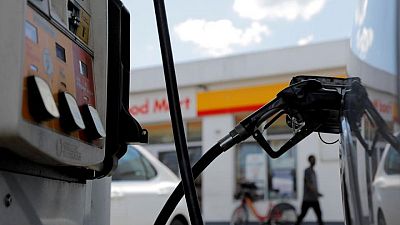 NEWYORK – Whether fuel pump prices fall in 2022 depends on two groups of producers who are struggling to increase oil output in the wake of the pandemic: OPEC and its allies and U.S. shale firms.

The global oil industry’s slow response to the surging demand in 2021 has contributed to soaring energy costs and inflationary pressures worldwide. As the economy recovers and populations resume road, rail and air travel, global oil demand has nearly rebounded to pre-pandemic levels.

Supply has not recovered so fast – so to keep up with demand, the industry is burning through oil kept in storage.

Benchmark oil prices have surged to multi-year highs over $86 a barrel, and some economists warn crude could surpass $100 a barrel, threatening the recovery.

The International Energy Agency (IEA) expects the roughly 100 million barrels per day (bpd) market to flip into surplus in the first quarter next year, and for supply to outpace demand by 1.1 million bpd, taking some heat out of prices. That oversupply could rise to 2.2 million bpd in the second quarter, the energy watchdog forecasts.

Those projections, however, depend on OPEC and its allies increasing output at 400,000 bpd per month, as the group known as OPEC+ slowly unwinds cuts it was forced to make during the pandemic.

But the IEA‘s monthly report on Tuesday showed OPEC+ is nowhere near its targets: it produced about 700,000 barrels per day (bpd) below those levels in September and October. That is largely due to top African producers Nigeria and Angola, whose maintenance and investment problems are likely to weigh on output next year.

If that underproduction continues, it could wipe out much of the surplus in the first quarter and keep markets tight for longer. The IEA hiked its 2022 forecast for average prices to $79.40 a barrel, even as it said higher supply could give some reprieve.

The United States and other big energy consumers have asked OPEC+ to increase output more quickly, but the group has refused due to concern coronavirus may again sap demand during the northern winter.

The market is now looking to the U.S. shale industry, which has provided most of the non-OPEC output increase over the past decade.

“There’s one element where you could probably further increase capacity, which is shale in the U.S.,” said Marco Dunand, chief executive of merchant Mercuria Energy Trading, at the Reuters Commodity Trading Summit this week.

The U.S. Energy Information Administration’s near-term expectations are lower, with overall crude and NGLs output set to rise by 220,000 in the second quarter. The EIA sees U.S. output accelerating in the second half of 2022, for a 1.25 million bpd increase in crude and NGLs for the year.

However, shale producers have responded more slowly than during previous price rises. Investors and shareholders have demanded greater capital discipline from the industry than in previous boom-bust cycles, and are punishing firms that invest in capacity and rewarding those that pay dividends and reduce debt.

“We’re at $83 a barrel on Brent, and we see no big surge in rig counts,” said Jeffrey Currie, Goldman Sachs global head of commodities research, at the Reuters summit.

Shale companies are grappling with labor and equipment shortages, while others say demand is still too uncertain to boost output as the industry recovers from the pandemic-induced recession.

“It’s still pretty fragile,” said William Berry, chief executive at Continental Resources, in a recent earnings call. “I don’t think it’s appropriate for anyone in the industry to be overproducing into that potentially fragile oversupplied market.”

Brazil’s state-run Petroleo Brasileiro SA is ramping up its 180,000 bpd floating platform Carioca, which in August started production at Sepia deep-water field in the Santos Basin.

Venezuela has seen its exports increase after receiving Iranian condensate, but it is unclear if that can be sustained, said Francisco Monaldi, director of the Latin American Energy Program at Rice University’s Baker Institute.

But energy consultancy FGE warned the market supply-demand balance may not change quickly with developed countries’ inventories at six-year lows.

“Although prices will probably trend down from last month’s peak, the current low inventory position sustains the risk of prices spiking higher in the next few months,” FGE said.