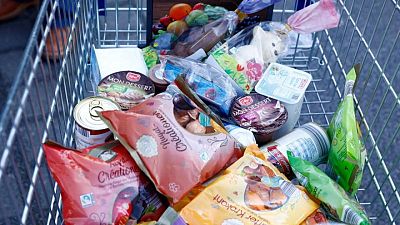 BERLIN – Germany’s inflation rate will drop noticeably at the start of next year when the effects of one-off factors peter out, the economy ministry said on Monday.

A base effect resulting from last year’s cut in value-added tax, part of the government’s COVID-19 relief measures, has contributed to the current inflation rate of 4.5% – the highest since 1993. Its impact has been compounded by a sharp rise in prices for raw materials and a rise in energy prices.

That sentiment, shared by central banks, was called into question by Deutsche Bank CEO Christian Sewing, who said that the situation required swift countermeasures.

Supply bottlenecks have also become more entrenched, the ministry said, meaning industrial activity is likely to remain subdued in the coming year despite a backlog of orders.

“This applies in particular to the important automotive industry, which is suffering from a shortage of semiconductors,” said the ministry.

With the easing of coronavirus measures, things have been looking up for service providers, which should be able to offset weaknesses in the industrial sector, the ministry said.

“Overall, however, Germany’s gross domestic product should increase only slightly in the final quarter of the year,” it added.

The German government recently cut its economic growth forecast for this year from 3.5% to 2.6%. In the coming year, that figure should rise by 4.1%, compared with an April prediction that it would grow by 3.6%.