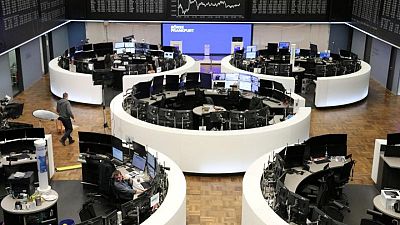 ECB President Lagarde said the current inflation spike will be longer than once anticipated but would fade next year, so policy action now would hit the economy just as price growth starts to moderate on its own.

The STOXX 600 has hit a series of record highs this month as strong corporate earnings and dovish central bank policy decisions lifted investor confidence, helping take the focus off a COVID-19 resurgence in the region.

Meanwhile, the European basic resources index slipped 1.1% as metal prices tumbled on China’s pledge to “phase down” coal at the COP26 summit. [MET/L]

The Austrian government on Sunday became the first European country to reinstate a fresh lockdown, placing millions of unvaccinated people under restrictions amid record-level infection rates.

“Across Europe, there has been further worry with rising COVID-19 cases, that restrictions could come back into place even as soon as the Christmas holidays,” said Oliver Males, sales trader at Spreadex .

Among other stocks, Royal Dutch Shell added 2.1% after saying it would simplify its business and move its head office to Britain from the Netherlands.

Spanish Bank BBVA was the biggest drag on Spain’s blue-chip IBEX, losing 4.3% on its offer to buy the rest of Garanti BBVA for up to 2.25 billion euros ($2.6 billion).

Shares of Philips, which is recalling ventilators due to use of parts containing a potentially hazardous foam, slid 10.6% after the company announced it was in talks with U.S. regulators following a new inspection of one of its facilities.