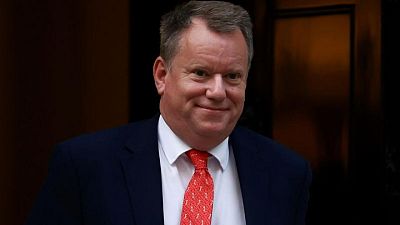 By Kate Holton and William Schomberg

LONDON -Britain and the European Union will intensify efforts next week to find a solution to the post-Brexit trade arrangements for Northern Ireland after Brussels cautiously welcomed a change in tone from London.

After meeting with Britain’s Brexit minister David Frost in London, EU negotiator Maros Sefcovic said the two sides would now seek to make headway on key issues such as customs checks and the movement of medicines into Northern Ireland.

Brussels also wants to see London reciprocate in the talks with its own concessions after it offered to cut some of the checks needed on goods moving from Britain to Northern Ireland.

Frost said “significant gaps” remained and Brussels must address the issues that London has raised, but he agreed that intensified talks would take place in Brussels next week, and that new energy and impetus were needed.

“I acknowledge and welcome the change in tone of discussion with David Frost today, and I hope this will lead to tangible results for the people in Northern Ireland,” Sefcovic told a news conference in London after the talks.

Relations between Brussels and London have deteriorated in recent weeks after Britain threatened to trigger emergency unilateral provisions, known as Article 16, in the Brexit deal.

Since leaving the EU last year Britain has delayed the introduction of some border checks that were designed to avoid the need for a hard frontier between the British province and EU member Ireland. London says the checks are disproportionate and threaten Northern Ireland’s 1998 peace deal.

The EU says tighter controls are necessary to protect its single market of 450 million people.

One area of particular concern regards regulatory oversight in Northern Ireland, with London demanding that any governing role for the European Court of Justice be removed from the UK-EU divorce settlement.

However, Sefcovic said this remained a red line for Brussels, saying the court was the “guardian of the single market rules”, rules that still apply in Northern Ireland.

“Without the European Court of Justice jurisdiction, there is no access to the single market,” he said.

Ireland has responded to the threats from London by warning that the whole 2020 free trade deal could be set aside if Britain rejects part of the rules agreed in the Brexit divorce deal. Other EU governments have agreed to take a “robust” line with London if ties break down.