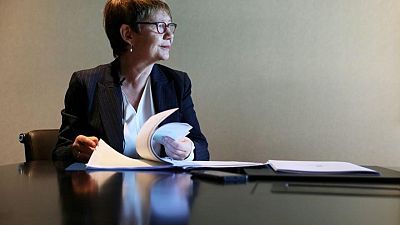 LONDON – Investors need to see a clear and credible policy framework in Turkey, the President of the European Bank for Reconstruction and Development said, adding she had raised the issue of very high inflation with President Tayyip Erdogan during a visit.

Odile Renaud-Basso, who visited the country this week, said she had an “interesting discussion” on the policy mix with Erdogan, who is a proponent of low interest rates to stem inflation pressures.

“On the one hand he (Erdogan) has very strong results, like very strong growth, but inflation is also very high and we discussed that,” Renaud-Basso told Reuters on Thursday.

She said she had also raised the fact that central banks globally were generally in a tightening phase, leaving Turkey out “on their own”.

Turkey’s central bank has stunned markets in recent months, slashing interest rates much faster than many anticipated while grappling with inflation closing in on the 20% level.

The lira hit a fresh record low on Friday, flirting with the 10 to the dollar level after losing more than 25% of its value since the start of the year. The currency has devalued by more than 80% over the past decade, its weakness exacerbating inflation pressures.

However, policy makers are expected to cut rates from 16% to 15% at their upcoming meeting on Nov. 18, leaving the country with deeply negative real rates.

Markets have long balked at Turkey’s unorthodox monetary policy making as well as the frequent personnel changes at the central bank, which have hurt policy credibility.

“I flagged that very important for long-term investors and for sustainable growth is to have a clear framework, a credible framework and an appropriate policy mix,” Renaud-Basso added.

Turkey is the single biggest recipient country of EBRD funds, receiving 1.7 billion euros in 2020. Majority owned by G7 top economic powers, the EBRD invests in 38 economies including central and eastern Europe as well as Egypt, Tunisia and Morocco in Africa.