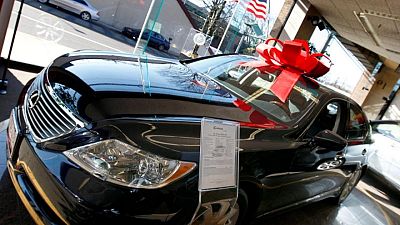 DETROIT – For years, luxury vehicle brands have promoted holiday season sales with slogans like Lexus’s “A December to remember.”

But automakers and dealers are on track to spend less on advertising this holiday season, industry executives and analysts said, leaving behind the generous lease deals and discounts of seasons past. A year of supply chain and production disruptions have left auto dealerships with roughly one-third of the normal inventory levels, giving sellers little reason to shell out for splashy holiday ads.

“We will not be promoting the holiday season as we have been,” said Rory Harvey, vice president of General Motors Co’s Cadillac brand. With the supply of vehicles at a third of normal levels, he said, “why would you?”

In 2019, General Motors spent an estimated $106 million on TV commercials for Cadillac and $16.4 million on digital ads for the brand, according to estimates from ad measurement and analytic firms EDO and Pathmatics.

Carmakers – usually big spenders during the fourth quarter – spent about $23 million or 10% less on digital advertising between late July to the end of October when compared to the same period in 2019, according to Pathmatics, which compiled data for Reuters. The 2019 data excludes Instagram ads.

The industry also spent $57 million or 5% less on broadcast television commercials during that time frame compared with 2019, according to estimates from EDO.

“Winter sales events are such an institutionalized event, that it’s hard not to do them,” said Kevin Krim, chief executive of EDO. “But if they do their jobs really well, they could make people unhappy if the cars aren’t there. It is a December to forget for the automakers.”

Ford Motor Co has begun a holiday campaign called “Get Holiday Ready,” to promote its F-series pickup and certain SUVs. Lexus is also going ahead with its annual “December to Remember” advertising campaign, which popularized the idea of a luxury vehicle as a holiday gift.

“For us to change it dramatically, it’s too important to the brand. It’s part of our DNA,” said the brand’s U.S. vice president for marketing Vinay Shahani. Lexus’ spending will be “in the ballpark” of past years, he said.

However, Shahani said, “certainly you could expect the offers may not be as compelling” as two years ago.

At the largest U.S. auto retail chain, AutoNation Inc, the plan is to spend less on advertising than in the pre-pandemic year of 2019, said Executive Vice President Marc Cannon. Discount offers from automakers “will be light all around,” he said.

Media companies that sell ad time for national television commercials could feel the brunt of the disruptions, said Michael Nathanson, an analyst with MoffettNathanson, in a research note last week.

Nathanson said he expects the total amount spent on national TV ads to decline by 1% year-over-year in the fourth quarter, as car manufacturers, which continue to struggle with chip shortages, could run fewer holiday commercials, he wrote.

That would also represent a 7% total decline in ads from 2019, in pre-COVID times, he added.

Looking ahead to the holidays, and beyond the car lot, some of shoppers’ favorite brands may have temporary marketing blackouts, due to inventory and labor shortages.

Department stores, including Macy’s and Nordstrom’s, spent 8% less on TV commercials from July 30 to Oct. 30 compared to the same period in 2019, according to EDO estimates.

However, the supply chain disruptions have not caused data analytic firms to lower projections for total ad spending this year because brands want to maintain a customer’s attention for when products are finally available, said advertising experts who spoke with Reuters.

Some advertisers have simply switched their messages to market products they have in stock while others merely want to keep their brand names in the front of consumers, said Bret Sanford-Chung, managing director of marketing consulting at KPMG.