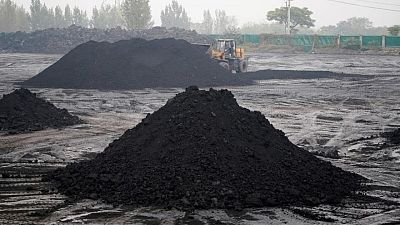 By Muyu Xu and Shivani Singh

BEIJING -In just 10 days after a blizzard of meetings and official notices, Chinese regulators last month nearly halved soaring domestic prices for thermal coal, the main source of power for the world’s No. 2 economy.

Beijing’s raft of interventions underscored the extent – and some limitations – of its regulatory might, but the country still faces the daunting task of keeping the fuel cheap and abundant through winter.

The price of thermal coal – which accounts for roughly 60% of China’s electricity needs – more than tripled in the 12 months to mid-October after years of moves to curb overproduction ran into booming post-pandemic industrial demand for power.

The most-traded thermal coal futures on the Zhengzhou Commodity Exchange plunged in the 10 days after hitting a lifetime high on Oct. 19, and were down 56% from that mark on Friday.

Spot physical coal prices at the southern port of Guangzhou also fell sharply and are now down nearly 44% from their October high. Prices for both, though, are still up more than 60% so far this year.

“No other country could have achieved a similar result considering the scale and timeline,” said Steve Hulton and Fabian Ronningen, analysts at consultancy Rystad Energy said.

“It truly shows the power of Chinese authorities over the domestic coal market and the economy in general.”

The raft of interventions has spilled into the global coal market, with prices in major coal exporters Australia and Indonesia falling in recent days, and has left market participants wary of further regulatory meddling.

And as colder temperatures across China crank up demand for heating and the need for more coal, Beijing is likely to face pressure to manage the country’s power-generating fuel supplies and costs until well into 2022, analysts and traders said.

To reverse the months-long climb in the price of coal, Beijing held dozens of meetings with producers, utilities, railway operators and industry associations, producing a flurry of market missives and warnings.

Some 71 power-related documents were issued by 32 national and local government bodies in October alone, according to a summary circulated among traders, chilling trading activity in coal futures, with coal open interest and volumes slumping on the Zhengzhou exchange.

Miners were urged to reverse course after years of efforts to curb overcapacity by shutting inefficient, low yielding or environmentally damaging coal deposits.

Traders who attended a meeting called by the National Development and Reform Commission (NDRC) on Nov. 3 said the message from the top economic planner now was that coal prices should not fall too far and too fast.

“With more coal capacity to be released and production to continue to increase … coal prices are expected to continue to decline steadily,” the NDRC said on Sunday.

The recent swell in fresh coal mine supply and a regulatory change allowing power producers to pass on higher prices https://www.reuters.com/business/energy/what-does-chinas-power-policy-shift-mean-metal-makers-other-energy-hogs-2021-10-13 has helped raise electricity output for households and reduce the number of power curbs in effect since September.

But analysts are closely eyeing China’s coal stockpiles for signs of market tightness.

Total coal inventories held at key ports across China – a measure which reflects both domestic production and imports – were at 52.4 million tonnes in October, according to the China Coal Transportation and Distribution Association. This is up 1.8% from September but roughly 20% below the October average from 2017 to 2020.

Inventories held by key power plants as at end-October were roughly 38% below the average for that month from 2017 to 2020, according to Caixin Data Technology Co.

The upcoming winter may also strain supplies, especially in open pit mines which can be affected by heavy snow – raising questions over the sustainability over the recent rise in output.

And with heating demand now set to climb as winter sets in, China’s State Grid Corp warned on Sunday there would be a “tight balance” between power supply and demand until Spring.

Rystad Energy analysts expect prices to continue to retreat in the short to medium term but warned “the thermal coal market is still currently very tight so any supply disruptions or extreme winter weather events could easily send prices shooting back up again.”

“We expect price volatility to be high,” they added.

What is clearer is Beijing’s commitment to steering the market, said Yu Aiqun, a researcher at U.S.-based Global Energy Monitor think tank.

“The government can put its hand in the market as deep as it wants,” she said.