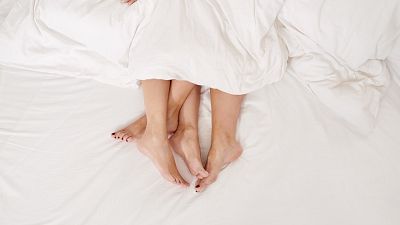 More American singles than ever before are checking out potential partners with a video call before meeting in person.

That's according to the 11th annual Singles in America Survey, carried out by researchers from the Kinsey Institute which specialises in studying sex, gender and relationships.

Half of single Gen Zs and Millennials went on a video date before meeting face-to-face in 2021, cementing a trend that was already on the rise, according to survey results from previous years.

The trend towards using tech wasn't confined to the younger generations, either. Overall, a quarter of respondents said they had been on a video date with a prospective partner.

Respondents of all ages said video calling made them feel more comfortable about meeting a new person, with 71 per cent saying it helped them decide whether or not to meet in real life.

But can people really make a connection through their smartphone screens? Apparently, yes, with 78 per cent of respondents saying they felt some romantic chemistry during their video dates.

However, the survey found that there were some limits to what a remote date can achieve. Roughly two-thirds of respondents said they did not believe they could fall in love via video chat.

While video dates are on the up, fewer people are using their phones for racier purposes: over a third of single Americans sent fewer nudes in 2021.

Love in the time of COVID

The Singles in America Survey asked 5,000 people aged 18-98 what their dating habits had been this year.

The survey also found changes in what single people were looking for in a partner.

Roughly three-quarters wanted to be with someone they found physically attractive, down from 90 per cent last year.

Two thirds of respondents also said they wanted their date to be vaccinated against COVID-19.

The survey's respondents also indicated that they would prefer a partner with a similar income and similar level of education to their own in greater numbers than in previous years.

"The current zeitgeist has it all wrong. Looks are out, emotional maturity is in. Stability is the new sexy," said anthropologist Dr Helen Fisher, chief science adviser at dating platform Match, which funded the research.

"While COVID wreaked havoc with our lives, it also triggered momentous post-traumatic growth. Singles have re-evaluated themselves and their plans. They've grown up," she added.

The pandemic has also changed attitudes towards physical intimacy, the survey found.

Over half of singles would be uncomfortable with making out with a new partner within the first three dates.

More than 70 per cent would now feel unsure about oral sex and 71 per cent would be uncomfortable having sex with a new partner within the first three dates.