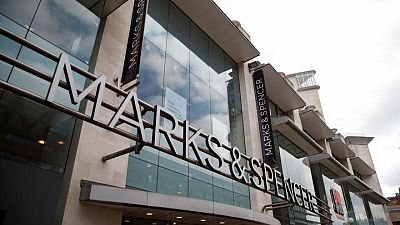 LONDON – Marks & Spencer on Wednesday beat forecasts for first-half profit and upgraded its earnings outlook for the second time this year, sending its stock soaring on bets that one of Britain’s most elusive turnarounds could finally materialise.

Shares in M&S jumped as much as 21% after the retailer said it expected full-year profit before tax and adjusting items to be about 500 million pounds ($677 million) compared to previous guidance of over 350 million pounds.

However, it cautioned that cost pressures will become progressively steeper and said the reintroduction of dividend payments in the current year remained unlikely.

“Given the history of M&S we’ve been clear that we won’t overclaim our progress,” Chief Executive Steve Rowe said.

“But … it is clear that underlying performance is improving, with our main businesses making important gains in market share and customer perception. The hard yards of driving long term change are beginning to be borne out in our performance.”

Rowe and chairman Archie Norman are overseeing a restructuring of the 137-year-old group which is focused on improving the quality and value of its clothing and food products, an overhaul of its store estate and investing in technology and e-commerce, including a venture with online supermarket Ocado.

The profit upgrade, only the second in at least two decades after one in August, is the strongest sign yet that the latest turnaround effort is starting to bear fruit after years of false dawns.

The company made a profit before tax and adjusting items of just 41.6 million pounds in the 2020-21 year.

The overhaul is happening in conjunction with supply chain disruptions that are causing price headaches for companies as the global economy reopens from pandemic restrictions and Rowe warned there remained a “substantive to do list.”

British retailers are grappling with delays in their international supply chains that are compounded by labour shortages in the UK transport and warehousing networks.

M&S said trading for the first four weeks of its second half has been consistent with growth rates reported in the second quarter and ahead of management expectations. It said it expected the strong demand to be sustained in the near term.

First half food sales increased 10.4% on 2019, before the pandemic impacted trading, while clothing and home revenue was down 1%, with full price sales up 17.3%.

“Credit is due to the management team for turning around something that was heading toward being uninvestable to being a potentially attractive recovery story,” said John Moore, investment manager at wealth manager Brewin Dolphin.