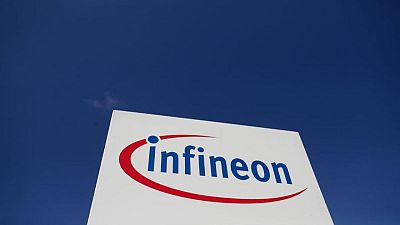 STOCKHOLM -German chipmaker Infineon expects the global semi-conductor shortage to remain well into 2022, it said as it posted a 10% rise in fourth-quarter revenue on soaring demand for chips used in everything from cars to home appliances.

Shares of the company rose 2% in Wednesday morning trade.

Infineon, which gets about 40% of sales from the automotive sector, also forecast revenue of 3 billion euros for its coming first quarter, exceeding the 2.97 billion euros expected in a poll of 19 analysts by Vara Research.

“Demand is by far outstripping supply,” Chief Executive Reinhard Ploss said on a call with analysts.

“Supply is bound to catch up with demand eventually, but we do not see this happening on a broader scale within 2022,” he said.

The leading supplier of chips to the auto industry is benefiting from a tailwind as more carmakers shift to electric vehicles, along with demand for chips used in consumer appliances and industrial equipment.

The company is also investing heavily to expand its manufacturing capacities – for silicon as well as for the compound semiconductors silicon carbide and gallium nitride.

Last month, the Munich-based chipmaker said it would invest about 2.4 billion euros ($2.8 billion) in 2022, up from about 1.6 billion this year.

Infineon’s revenue rose to 3 billion euros ($3.47 billion) from 2.72 billion in the fourth quarter, ahead of expectations of 2.93 billion, according to IBES data from Refinitiv.

Infineon forecast 2022 revenue of between 12.2 billion and 13.2 billion euros, in line with expectations. It also increased its dividend by 5 euro cents to 27 euro cents per share.

Guidance for segment result margin – a measure of operational profitability – is predicted to come in at about 21%, up from 18.7% this year.