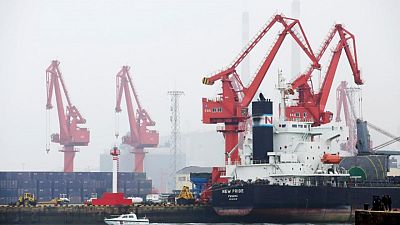 By Chen Aizhu and Alex Lawler

SINGAPORE/LONDON – China’s imports of Iranian oil have held above half a million barrels per day on average for the last three months, traders and ship-tracking firms said, as buyers judge that getting crude at cheap prices outweighs any risks from busting U.S. sanctions.

Chinese purchases of Iranian crude have continued this year despite the sanctions that, if enforced, would allow Washington to cut off those who violate them from the U.S. economy.

President Joe Biden’s administration has so far chosen not to enforce the sanctions against Chinese individuals and companies amid negotiations that could revive a 2015 nuclear deal that would allow Iran to sell its oil openly again.

After a dip in June and July from a record high in May as buyers ran low on import permits, Chinese independent refiners embraced Iran’s cheaper crude again as the government released fresh quotas, the traders and ship-tracking sources said.

Iranian oil shipments, now worth some $1.3 billion a month and the bulk of which go to China, provide key revenue for Tehran. Iran and world powers are set to resume talks on Nov. 29 to restore the nuclear deal and lift U.S. sanctions on the sales.

Iranian arrivals into China hit 660,000 bpd in August and 545,000 bpd in September, before dropping back to 470,000 bpd in October, according to data from Vortexa Analytics.

Other tanker trackers said Vortexa’s volumes for the three months are similar to their own estimates.

Petro-Logistics Chief Executive Daniel Gerber, while noting that the volumes are down from earlier in the year, said: “Going forward, if China is able to control the recent surge in COVID infections, I would not be surprised to see stronger imports from Iran, given high oil prices, OPEC discipline and the discounts that are available on sanctioned oil.”

Officially, China has not imported any oil from Iran since the start of 2021, according to its customs data, as state-owned refiners remain sidelined by the U.S. sanctions.

Iranian crude, which accounts for about 6% of China’s crude oil imports, is currently exported to China as oil from Oman, the United Arab Emirates and Malaysia, squeezing out supplies from Brazil and West Africa, traders said.

Iranian oil was last transacted at a $4-$5 per barrel discount to Brent crude on a delivered basis, about $6-$7 below Middle East benchmark Oman, traders said.

Beijing’s acquiescence over these transactions has also emboldened traders and buyers.

“The government does not wish to intervene as it sees little downside risks allowing in these imports,” said a China-based trading executive involved in the business, who declined to be identified due to the sensitivity of the matter.

China’s foreign ministry told Reuters normal business dealings between China and Iran should be respected, without going into details on shipments.

“China urges the U.S. to lift the illegitimate unilateral sanctions as soon as possible,” the ministry said.

Washington is aware of China’s Iranian oil purchases, a senior U.S. official told Reuters in September, and has chosen diplomacy as a “more effective path forward to address our concerns”.

The official, however, speaking on condition of anonymity because of the sensitivity of the matter, said the United States had applied sanctions before and would do so again if necessary.

The U.S. State Department and Iran’s oil ministry both declined to comment.

In the quota interim, about 7 million barrels were moved into bonded storage between July and September, according to Vortexa and the China-based trading executive, to await Beijing’s October quota release.

“Any significant improvement in the nuclear talks will lead to higher imports from Iran, although much of the volumes will first be discharged from bonded tanks,” said Michal Meidan, director of the China programme at Oxford Institute for Energy Studies.

“Renewed flows from Iran are more likely next year.”