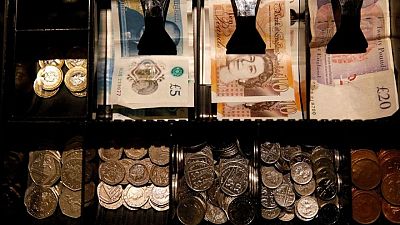 Britain left the EU last year but has since put off implementing some of the border checks between its province of Northern Ireland and EU member Ireland that the bloc says London is obliged to under their divorce deal.

Sterling was under renewed pressure after the Irish government ministers met to dust off contingency plans in case disagreements between Britain and the EU trigger major trade disruption.

Ireland said the British government appears ready to invoke emergency unilateral provisions, a move that would sour ties with Dublin, the EU and the United States.

“Downside risk may emerge for the pound in the coming days as it looks increasingly likely that the UK will unilaterally suspend parts of the Northern Ireland Protocol,” analysts at ING said.

Markets were also on the watch for “new data to weigh the timing of the first BoE hike after last week’s surprise hold,” ING added.

In its November policy meeting, BoE left its main interest rate unchanged at 0.1% having previously signalled it could raise it. Markets are now pricing a December interest rate rise, but uncertainty remains high. .

Versus the euro, the pound flattened at 85.52 pence, after falling on Friday to its lowest level since Oct. 1.

Investors are also waiting for U.S. consumer price index data for October set to be released later in the day as global inflation readings are under close scrutiny for evidence of whether rising prices will encourage policy makers at the Federal Reserve and elsewhere to adjust their monetary policies.