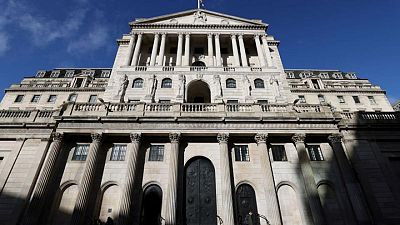 LONDON -The Bank of England and Britain’s finance ministry said on Tuesday that they would hold a formal consultation next year on whether to move forward on a possible central bank digital currency (CBDC) that would take years to introduce.

Central banks across the world are studying digital versions of their currencies to avoid leaving digital payments to the private sector as the decline of cash has accelerated in some cases due to the COVID-19 pandemic.

“No decision has been made on whether to introduce a CBDC in the UK, which would be a major national infrastructure project,” the BoE said in a statement.

“The earliest date for launch of a UK CBDC would be in the second half of the decade,” it added.

The consultation paper will set out an assessment from the ministry and BoE of the case for a CBDC before a decision on whether to proceed.

“A technical specification would follow the consultation explaining the proposed conceptual architecture for any CBDC. This could involve in-depth testing of the optimal design for, and feasibility of, a UK CBDC,” the document said.

Financial services minister John Glen said a retail CBDC would be used by people and businesses for their everyday payments needs and helping Britain stay at the forefront of innovation and technology in the financial sector.

The European Central Bank in July took a first step towards launching a digital version of the euro, kicking off a 24-month investigation phase to be followed by three years of implementation.

Work on a digital euro accelerated after Facebook unveiled plans to create its own currency in 2019, a potential threat to central banks’ core business.

While China has been at the forefront of CBDC moves, the U.S. Federal Reserve has been more sceptical.

Some central banks have warned that widespread use of CBDCs could hollow out commercial banks, depriving them of a cheap and stable source of funding like retail deposits.