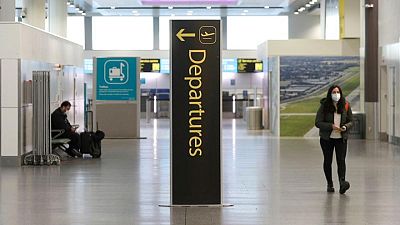 LONDON – Britain must bring back pre-pandemic rules on airport slots now, the country’s second biggest airport Gatwick and low-cost Hungarian airline Wizz Air said in a letter to the government on Tuesday.

With most COVID-19 restrictions removed, the number of people travelling is picking up, and Gatwick, Wizz plus Belfast and Edinburgh airports want pre-crisis rules back in place to encourage more flying.

Under normal rules, airlines must use 80% of their take-off and landing rights at busy airports or cede slots to competitors but the so-called “use it or lose it” rule was waived early in the pandemic when the crisis grounded most flights.

Gatwick has particularly suffered from the waiver because British Airways and Virgin Atlantic have not been flying from there but have been able to retain their slots, putting a dampener on the recovery at London’s No.2 airport.

Wizz has long-stated its ambition to expand at Gatwick, owned by France’s Vinci and Global Infrastructure Partners, but says the slot waiver is preventing it from adding new flights.

In the letter sent to Britain’s Transport Minister Grant Shapps, Gatwick said it was having to turn away potential new airlines because of the waiver and blamed it for only 58% of its pre-pandemic routes operating in August, putting it behind bigger competitor London Heathrow.

“A return of the ‘80/20’ slot rules would bolster the UK aviation sector’s recovery, provide competition and choice for consumers, and help the country connect to vital international destinations,” Gatwick, the other two airports and Wizz said in the letter.

The Department for Transport said in response to the letter: “We are due to consult on airport slots shortly, and will set out firm plans for the summer 2022 season early next year.”