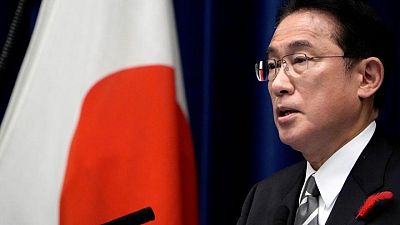 By Tetsushi Kajimoto and Takaya Yamaguchi

TOKYO – Japanese Prime Minister Fumio Kishida’s pledge to deliver a big economic stimulus this year faces challenges, including negotiations within his coalition and a tight schedule to secure funding for the spending.

Below are key issues confronting Kishida, his ruling Liberal Democratic Party (LDP) and the finance ministry, as discussions on the package begin in earnest on Monday:

The case for supporting Japan’s economy is urgent as supply disruptions hurt mainstay exports for the world’s third-biggest economy even as consumption has yet to accelerate after the Sept. 30 lifting of COVID-19 curbs.

Delay in approving Kishida’s promised extra budget for this year could disrupt passage of other key legislation as parliament’s regular session next year must end in time for a summer upper house election.

“The government’s hope is for parliament to pass the extra budget by year end so that the spending would underpin the economy in the first quarter of next year,” a finance ministry official with knowledge of the matter told Reuters.

Japan’s government and ruling bloc usually agree on additional spending plans around October, giving the finance ministry time to draft an extra budget to be enacted before previous funding runs out.

This time, the schedule is tight because procedures to craft the package and extra budget were disrupted by the Oct. 31 general election, which affirmed Kishida’s rule weeks after he took office.

Kishida says the package will focus on helping households hit hardest by the COVID-19 pandemic and include steps to distribute wealth more broadly to households. He has offered little detail on the size of the package beyond that it will be worth several hundred billion dollars.

Negotiations on the details have just begun, leaving little time for bureaucrats to compile a draft budget. The extra budget must pass through parliament next month to avoid a delay in enacting next year’s budget by the March end of this fiscal year.

DELAYRISKS?The size and timing of the package will be swayed by how smoothly the LDP and its coalition partner Komeito agree on the size of payouts to individuals.

The government and coalition have agreed to pay each person up to age 18 about $900, costing the government some $18 billion, the Yomiuri newspaper reported on Friday.

The coalition parties on Monday will discuss details on how much to offer children, said Kyodo news agency.

The spending plan will require delicate negotiations among lawmakers and bureaucrats. In a potential signal of resistance, the ministry’s top bureaucrat, Koji Yano, recently issued a rare criticism of politicians engaging in pork-barrel spending.

Another contentious issue will be how much debt the government must issue to fund the package, another area Kishida has not detailed. The lack of clarity leaves economists guessing.

Some tip the scale of the stimulus spending around 30 trillion yen ($260 billion), a figure once floated by Kishida, but estimates vary widely.

Takuya Hoshino, senior economist at Dai-ichi Life Research Institute, forecasts a notably smaller budget of 20 trillion to 30 trillion yen ($180-$260 billion) but which would require up to twice as much in bond issuance at 10 trillion yen ($90 billion).