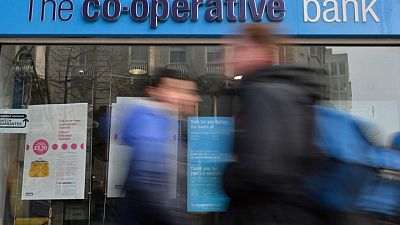 LONDON -Britain’s Co-op Bank is looking for more deals with rival banks after its merger approach for TSB was rebuffed last month, its chief executive said on Friday.

The self-styled ethical lender reported a third straight quarter of profits, as it made further progress on its turnaround after nearly a decade of annual losses.

In a sign of its improved fortunes, Co-op Bank is in the market for acquisitions following an unsolicited approach for TSB, which was rejected by Spanish owner Sabadell.

“We want to make sure we’re in the best position we can be to take advantage of opportunities should they arise,” CEO Nick Slape told Reuters.

Takeover interest in Britain’s mid-sized banks has picked up in recent weeks, with shares in fellow challenger bank Metro Bank surging 29% on Thursday after it revealed an approach from U.S. private equity giant Carlyle.

Slape said he still believed a tie-up with TSB to create a bank with 65 billion pounds ($87.26 billion) of assets made sense.

Sabadell said last week it has no plans to sell TSB for now. However, Sabadell has made no secret of its desire to refocus on its home market of Spain in the longer term and put TSB up for sale last year only to shelve the plan a few months later.

“Sabadell have made it very clear that now is not the right time,” Slape said. “We’ve left it. We respect that position and have left it like that. I’m patient, the board is patient and we’ve got plenty on our plate.”

Co-op Bank reported pretax profits of 28.5 million pounds for the nine months to September, compared to a 68.1 million pound loss over the same period last year.

The lender has started to reap the benefits of a period of painful restructuring, after its near-collapse and rescue by a group of U.S. hedge funds in 2017.

Slape said the bank was enjoying a “turning point” year, with growth in mortgage volumes amid a housebuying boom improving its returns.