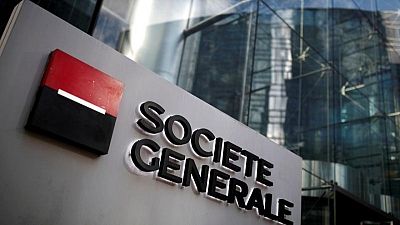 Earnings at SocGen mirror those of U.S. and European competitors who slashed provisions for COVID-19 losses on a global economic rebound. A record wave of dealmaking and financing activities also bolstered results for lenders such as Goldman Sachs and JPMorgan.

France’s third-largest listed lender, after BNP Paribas and Credit Agricole SA, said its net income nearly doubled in the reported quarter to 1.6 billion euros ($1.85 billion) from 862 million euros a year ago, and beat mean forecast for 952 million euros in a poll of analysts compiled by Refinitiv.

The lender improved its 2021 outlook for provisions. It now expects cost of risk, which reflects the level of provisioning against bad loans, not to exceed 20 basis points this year against a previous forecast of between 20 and 25 basis points.

In the third quarter, provisions decreased by 62.2%, while revenue grew 14.9% to 6.67 billion euros, above the 5.85 billion euros forecast by analysts.

SocGen said in a statement it was launching a share buyback programme of about 470 million euros.

Revenue in equity trading was up 53% in the third quarter while revenue in advisory and financing rose by 31%.

SocGen’s Chief Financial Officer William Kadouch-Chassaing will leave the bank by the end of this month, and be replaced by current deputy financial chief Claire Dumas from Dec. 1, the lender confirmed in a separate statement.

Dumas, a former Deloitte auditor, joined SocGen in 1998 and has been the bank’s deputy CFO since September 2017.