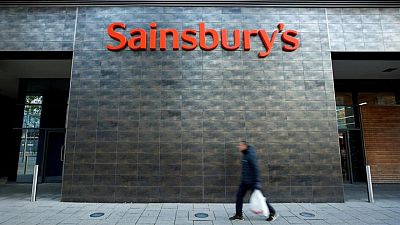 LONDON – British supermarket group Sainsbury’s said it was well-placed for Christmas as it reported a 23% jump in first-half profit on higher grocery sales, but its shares fell more than 4%on concerns its sales growth is lagging market leader Tesco.

Shares in Sainsbury’s have been buoyed this year by bid speculation that started in April when Czech billionaire Daniel Kretinsky raised his stake in the group to just under 10% and was then fuelled by the bid battle for rival Morrisons https://www.reuters.com/world/uk/cdr-wins-10-bln-auction-uk-supermarket-morrisons-2021-10-02.

British retailers are grappling with delays nL8N2QQ48D in their international supply chains that are compounded by labour shortages in the UK transport and warehousing networks.

“Our industry faces labour and supply chain challenges. However our scale, advanced cost-saving programme, logistics operations and strong supplier relationships put us in a good position as we head into Christmas,” Sainsbury’s CEO Simon Roberts said.

He told reporters Christmas 2021 would be big, with Britons set to make up for last year when pandemic restrictions limited celebrations.

However, he warned shoppers to prepare for a shortage of consumer electronics products and said shipping delays had forced the group to delay a toys promotion.

Group like-for-like sales, excluding fuel, rose 0.3% in the half – falling 1.4% in the second quarter, having increased 1.6% in the first quarter.

It was also helped by customers eating at home more even after lockdown ended, it said.

Roberts said Sainsbury’s prices were flat in the first half, though inflationary pressures were building in the second half.

The group maintained its guidance for full-year profit of “at least” 660 million pounds, up from the 356 million pounds made in 2020-21.

“Against further strong comparatives in the second half of the year, we continue to expect customer behaviour to normalise and grocery growth to moderate and we will continue to invest to further improve our value position,” Roberts said.

Sainsbury’s also kept its forecast to reduce non-lease net debt by at least 950 million pounds by March 2023, generating average retail free cash flow of at least 500 million per year over the three years to March 2025 and is paying an interim dividend of 3.2 pence a share.