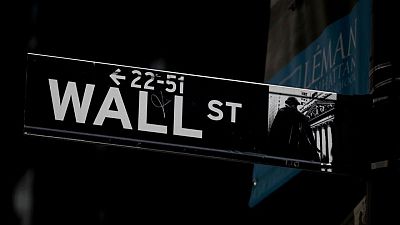 The Bank of England, in announcing it would keep interest rates on hold, also dashed investors’ expectations for a hike.

The S&P 500 and Nasdaq rose to record highs while the Dow Jones Industrial Average slipped from an all-time hit the prior day, dragged down by shares of banks JPMorgan Chase & Co and Goldman Sachs Group.

The benchmark 10-year yield, which rose as high

since mid-October at 1.509%, marking its biggest downward move

since July 19. It was last down 5.8 basis points at 1.5209% after a report that Saudi Arabia’s oil output will soon surpass 10 million barrels per day for the first time since the outset of the coronavirus pandemic.

The report, from Saudi-owned Al Arabiya TV, came after the nation, along with other Organization of the Petroleum Exporting Countries and its allies, agreed to stick to previously agreed-upon production increases.

“The market has really had to reset itself as far as exactly how quickly some of these major central banks are going to be tightening policies,” said Edward Moya, a senior market analyst at Oanda.

In Asia overnight, Japan’s Nikkei climbed 0.9% and touched its highest in a month, while MSCI‘s broadest index of Asia-Pacific shares outside Japan crept up 0.4%.

The Asian index has been burdened by a spike in new coronavirus cases in China that threatens to curb consumer spending in an already slowing economy also hampered by property market strains.

As expected, the Fed announced it would trim its bond buying by $15 billion a month from this month, while leaving open the option to quicken or slow the pace as needed.

Fed Chair Jerome Powell, however, did sound slightly less sure inflationary forces would prove to be fleeting, enough to hit longer-term bonds and “bear steepen” the yield curve. [US/]

“Overall, we didn’t get anything that should imply higher market pricing of hikes than what we have now,” said Jan Nevruzi, an analyst at NatWest Markets.

“While not an ultra-dovish (Fed) meeting, the result was still a far cry from some of the more stunning hawkish surprises seen recently from the likes of the Bank of Canada,” added Nevruzi.

The Canadian and Australian central banks have caused turmoil in their bond markets in recent weeks by abruptly changing tack on policy.

Poland’s central bank surprised with an aggressive hike on Wednesday and the Czech Republic on Thursday raised its main interest rate by 125 basis points, heightening a mass trend of rate rises in emerging markets this year.

The dollar rebounded on Thursday from a dip on Wednesday as speculators consolidated long positions following five months of steady gains.

The dollar index, which tracks the greenback versus a basket of six currencies, rose 0.486% to 94.32.

The euro was last down 0.47 percent, at $1.1556, after being hampered by expectations the European Central Bank will trail the Fed in tightening.

Long-dated euro zone bond yields had been edging higher earlier but dipped with the BoE gyrations.