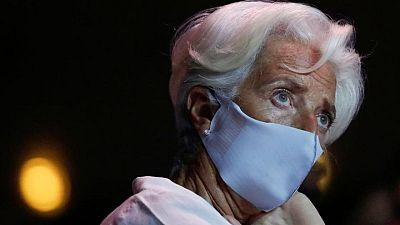 By Dan Burns and Howard Schneider

-The world’s top central banks are pushing back in unison on the idea that higher interest rates will be needed to fight a run of high inflation and have now bound their monetary policies tight to the hope that the world’s tangled supply chains are on the verge of repair.

The Bank of England on Thursday joined the Federal Reserve and the European Central Bank in pinning a dovish policy twist to an expected easing of supply bottlenecks over the next few months – and an easing of the inflationary pressure officials feel those bottlenecks have caused.

The BoE on Wednesday held its policy interest rate steady https://www.reuters.com/world/uk/bank-england-wrong-foots-markets-keeps-rates-hold-2021-11-04 despite broad expectations it would become the first major central bank to raise interest rates in a nod to the high pace of price increases that has taken root this year.

Inflation “is expected to dissipate over time, as supply disruption eases, global demand rebalances, and energy prices stop rising,” with a peak likely in April next year, the BoE said in an announcement in which it vowed to train its eye on “medium-term prospects for inflation” and ignore “factors that are likely to be transient.”

That echoed the Fed’s use of the word “transitory” https://www.reuters.com/business/with-bond-buying-taper-bag-fed-turns-wary-eye-inflation-2021-11-03 to describe the current inflation episode, and the ECB‘s expectation that price increases will be “subdued” over the medium term. In a statement this week, ECB President Christine Lagarde was explicit in saying, amid market bets to the contrary, that the European bank was unlikely to raise interest rates in 2022.

It’s a recommitment, in a sense, to one of the core aims of monetary policy since the onset of the pandemic: To keep borrowing costs low for long enough to see households and national economies through to the end of the health crisis, a goal still not met given ongoing infections, missing jobs, and uncertainty about when workers might more fully return.

But it’s also now creating a joint outlook – and a joint set of risks – for central banks that control three of the world’s top reserve currencies, and which many felt were about to shift into inflation-fighting mode.

Instead, they are banking on the resolution of problems outside their control, from port backlogs to the progress of the virus in manufacturing centers or the willingness of U.S. residents to fill near-record job openings.

“Our tools cannot ease supply constraints,” Powell said in a news conference on Wednesday after the release of the Fed’s latest policy statement. But, in an outlook now shared among major developed countries, “we continue to believe that our dynamic economy will adjust to the supply and demand imbalances and that as it does, inflation will decline to levels much closer to our 2% longer-run goal.”

The question is whether improvements in supply happen fast enough that Powell and his colleagues don’t feel a need to intervene by curbing demand with higher interest rates, a step they all for now agree is premature but hinges on inflation easing over the next few months.

Some smaller central banks have already moved towards an exit from pandemic-fighting policies.

The Bank of Canada a week ago surprised markets with hawkish signals about its outlook and then this week the Reserve Bank of Australia suggested interest rate increases were on the way, even though the RBA took a more cautious approach on the timing.

That led to a rush of expectations that the major monetary policy actors would accelerate their own timelines for rate hikes. Rate futures and bond markets on both sides of the Atlantic had repriced for an earlier rate-hike lift-off by the Fed and ECB over the last month in the face of an inflation environment that was threatening to prove more sticky than transient.

Pricing around Fed hikes has eased already. Yields on 2-year Treasuries fell around 5 basis points on Thursday, the largest drop in nine months and a proxy for expectations of Fed policy – declining even as the U.S. central bank announced it would trim its $120 billion monthly bond-buying program by $15 billion per month.

“If there is a mistake it is how markets read the reaction function of these banks,” said Ed Al-Hussainy, senior rates analyst for Columbia Threadneedle Investments. All are in agreement on the likely turn of inflation next year, and in the Fed’s case it has committed to a return to “maximum employment,” a goal it has not fully defined but which Powell emphasized on Wednesday had not been met.

“They have never had a maximum employment criteria for ‘lift-off.’ It’s a wild experiment and it is just starting. Why short-circuit it now?,” the analyst said.