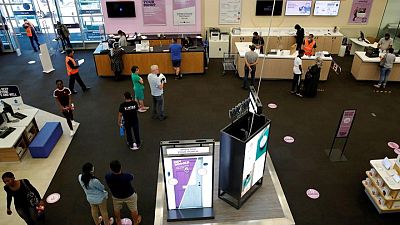 British retailers are grappling with delays in their international supply chains that are being compounded by labour shortages in the UK transport and warehousing networks.

Alex Baldock, CEO of Currys, which was previously called Dixons Carphone, said the firm had worked hard to mitigate the risks and as UK market leader had an advantage with suppliers, such as Samsung Electronics, Hewlett Packard and Arcelik, in having first call on scarce stock.

“It’s been incredibly hard work but we’re in quite good shape. We’ve got more stock in the business now than we had last year and we’re confident that we’re going to have a strong peak trading period,” he told reporters at Currys’ Staples Corner store in north west London, where he hosted a Capital Markets Day.

“Are we going to have every item in every sub-category that we would ideally like in every store, probably not,” he said.

“But to give you a sense of perspective, we might be talking about offering 120 large screen televisions rather than 140.”

Baldock was asked if there would be any product categories where Currys would be totally out of stock.

“The short answer is no, we’re not calling that out as a problem,” he said.

Separately on Thursday, Sainsbury’s, Britain’s second largest supermarket group and the owner of the Argos general merchandise chain, warned shoppers to prepare for a shortage of consumer electronics products this Christmas.

Earlier, Currys said strong demand for tech products pushed its six-month sales up 15% compared with the same period before the COVID-19 pandemic, enabling it to launch a $100 million share buyback.