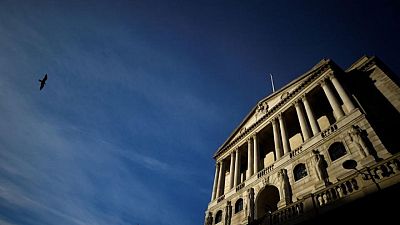 By Tommy Wilkes and Saikat Chatterjee

LONDON – Investors assailed the Bank of England on Thursday for not delivering an interest rate rise they had bet on, in what may be a sign of things to come as central banks around the world tread carefully to balance inflation risks and economic growth.

Although economists do not expect https://www.reuters.com/world/uk/bank-england-raise-rates-025-q1-possibly-sooner-2021-10-21 a first post-pandemic rate hike until early next year, investors had priced in a move after what they said were weeks of signalling by BoE policymakers, including Governor Andrew Bailey, that rates needed to rise.

Thursday’s 7-2 vote against tightening policy triggered a 1.5% drop in sterling and a jump in government bond prices, while money markets that had also priced in a second hike before year-end pushed back their bets to February.

“Pathetic communication from the BoE. Bailey basically marched us up the hill, and then voted to keep rates steady,” said Peter Kinsella, head of FX at Swiss private bank UBP.

“They will have made themselves no friends in the market today.”

Bailey defended the decision https://www.reuters.com/world/uk/bank-england-wrong-foots-markets-keeps-rates-hold-2021-11-04 in a news conference, saying policymakers had never indicated they would act at a particular meeting. The BoE says it will still need to raise rates in the coming months if the economy performs as expected.

Bailey rejected a suggestion by a reporter that he was “unreliable boyfriend number two,” a nickname first used by a lawmaker in 2014 to describe his predecessor Mark Carney, whose signals on rate moves failed to translate into action.

“It’s not compulsory for a governor of the Bank of England to be an unreliable boyfriend,” Bailey joked.

Monetary policy could do little to dampen inflation in the near term and longer-dated inflation expectations had risen relatively less, he added.

“The question is, why has the governor sounded so hawkish over the last couple of months when in speech after speech he has clearly nudged market expectations higher?”

The BoE is not the only central bank to have wrong-footed markets in recent days and be accused of confused messaging.

The Reserve Bank of Australia https://www.reuters.com/business/australias-central-bank-holds-rates-drops-yield-target-2021-11-02 last week stood by as markets busted its 0.1% target on three-year bond yields. It then dropped the target and agreed rates might rise before a previously flagged 2024 date, in a move UBP‘s Kinsella dubbed “capitulation”.

Euro zone bond yields rose after the European Central Bank https://www.reuters.com/world/europe/ecb-push-back-over-mounting-rate-hike-expectations-2021-10-27 came across as too timid last week in pushing back against markets’ interest rate projections. The Bank of Canada https://www.reuters.com/world/americas/bank-canada-signals-it-could-hike-rates-sooner-than-expected-2021-10-27 meanwhile surprised hawkishly, saying it could hike as early as April.

Janus Henderson’s O’Connor said the difficulty markets are having in reading central banks reflected both the murky outlook for prices as economies recover from COVID-19 and the adoption by some central banks of more flexible inflation targets.

The BoE is not among those. So with survey-based price expectations at 13-year highs https://www.reuters.com/world/uk/uk-inflation-expectations-highest-since-2008-before-boe-rate-decision-citiyougov-2021-10-26 and annual inflation seen at 4.25% by end-2021, money markets had priced in a 15 basis-point rate rise for this week and another 25 bps hike next month.

“There’s a lot more uncertainty regarding central banks’ reaction function. Until now there has been no conflict — they were sustaining growth because inflation was not a problem,” O’Connor said, urging banks to better articulate which objective they were prioritising.

Markets now expect a total 97 bps of BoE hikes by November 2022 versus 120 bps seen at the start of this week. (Graphic: Markets react to the BOE policy decision, https://fingfx.thomsonreuters.com/gfx/mkt/egpbkaklrvq/GBP0411.png)

Not everyone agrees that investors have been misled by the BoE and its peers.

The pricing of a July 2022 ECB rate increase, for example, was always at odds with the bank’s communications and the bloc’s economic data.

Some analysts said market pricing for a BoE tightening on Thursday had been exaggerated by technical factors, while others said traders had misinterpreted recent comments by policymakers https://www.reuters.com/article/britain-boe-quotes-idUSKBN2HM27B including Bailey and the BoE’s new chief economist Huw Pill.