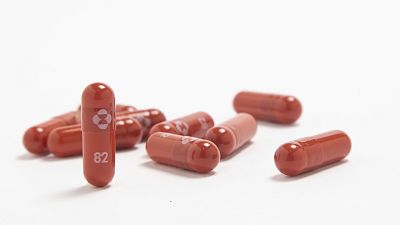 Drugmaker Merck said the pill cut hospitalisations and deaths by half among patients with early COVID-19 symptoms   -   Copyright  AP/Merck & Co.
By Tom Bateman  with AP  •  Updated: 12/11/2021

The United Kingdom has become the first country to approve the use of the anti-COVID pill molnupiravir.

The drug has been licensed for use treating adults with "mild to moderate" COVID-19 who are at risk of developing severe disease as a result of pre-existing health conditions like heart disease and obesity.

An antiviral drug, molnupiravir is the first pill shown to be an effective treatment for COVID, and is intended to be taken twice a day for five days after symptoms of the virus appear.

In clinical trials the pill, which was originally conceived as a treatment for flu, almost halved the risk of death or hospitalisation from COVID.

The UK's health and social care secretary Sajid Javid called it a "game changer" for patients at high risk from COVID-19, as well as for those who are unable to be vaccinated against the virus.

"This antiviral will be an excellent addition to our armoury against COVID-19, and it remains vital everyone comes forward for their life-saving COVID-19 vaccine - particularly those eligible for a booster - to ensure as many people as possible are protected over the coming months," he said.

In October, British officials announced they had secured 480,000 courses of molnupiravir and expected thousands of vulnerable people to have access to the treatment this winter via a national study.

Further supplies may be limited, however: while the drug's manufacturer, Merck, has said it can produce 10 million courses of molnupiravir treatment by the end of this year, much of that supply has already been bought up by governments worldwide.

How does molnupiravir work?

Molnupiravir, also known by the brand name Lagevrio, is an antiviral drug that targets the enzyme the coronavirus uses to replicate itself.

Merck announced preliminary results last month showing its drug cut hospitalisations and deaths by half among patients with early COVID-19 symptoms. The results have not yet been peer-reviewed or published in a scientific journal.

The company has also not disclosed details of molnupiravir's potential side effects, saying only that it produced comparable results to placebo drugs during trials.

The UK's Medicines and Healthcare products Regulatory Agency (MHRA) said molnupiravir's ability to interact with DNA and cause mutations had been studied "extensively" and that it was not found to pose a risk to humans or pregnancies.

"Studies in rats showed that (molnupiravir) may cause harmful effects to the unborn offspring, although this was at doses which were higher than those that will be given to humans, and these effects were not observed in other animals," the agency said in an email to the Associated Press.

In company trials, both men and women were instructed to either use contraception or abstain from sex. Pregnant women were excluded from the study. Merck has stated that the drug is safe when used as directed.

"Following a rigorous review of the data by our expert scientists and clinicians, we are satisfied that Lagevrio (molnupiravir) is safe and effective for those at risk of developing severe COVID-19 disease and have granted its approval," MHRA chief executive Dr June Raine said in a statement.

In its statement announcing the approval of the drug, the UK government emphasised that it was not intended to be used as a substitute for COVID-19 vaccines.

UK authorities and the country's National Health Service are still working to confirm how the pill will be used, the government said.

Dr Bharat Pankhania, senior clinical lecturer at Exeter University College of Medicine and Health, said molnupiravir was "good to have in the armoury against COVID-19".

He told Euronews the drug is suitable for people with mild coronavirus symptoms. "My advice as a clinician would be 'take it, and take it as soon as possible. For it to work, you've got to take it early," he said.

"This is not a magic pill. The best protection possible is be fully immunised, take your boosters, also be fully immunised for the seasonal influenza, and wear your mask, wear a better quality mask like an FFP2 mask for the Delta variant which is more infectious," he added.

"Those preventative measures are in your favour, and then you've got a new armament which is this pill."

This article originally published on November 4 has been updated to include quotes from Dr Bharat Pankhania — view the interview in the video player above.