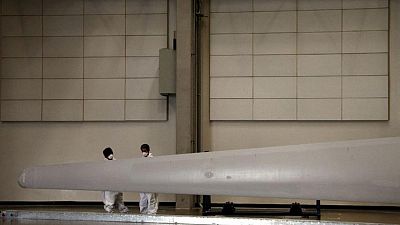 COPENHAGEN -Vestas slashed its 2021 outlook for a second time this year in response to higher costs and supply constraints, sending its shares tumbling as much as 14% as the world’s largest maker of wind turbines posted forecast-lagging quarterly profit.

Citing rising costs and supply chain instability caused by the coronavirus pandemic, the company on Wednesday said it now expected its operating profit margin to be 4% from 5-7% previously – a far cry from its long-term target of a 10% margin.

“The prices are something I don’t think anyone has experienced previously and it’s a very, very tough environment,” Chief Financial Officer Marika Fredriksson told Reuters.

“I think it’s likely it’s going to continue into next year and I don’t see the trend changing,” she said, adding that the company has not yet cancelled any projects but there had been several delays.

The global supply disruptions are not the only challenge faced by companies in the industry, operators of wind farms are also grappling with weaker winds.

Compatriot Orsted, the world’s largest developer of offshore wind farms, said on Wednesday low wind speeds continued to hit its earnings, showing that despite strong fundamentals, renewables are still an intermittent technology where swings in the level of winds and sunshine have a direct impact on earnings.

Vestas on Wednesday also announced that Fredriksson will be stepping down as CFO being the last of a Swedish trio – along with former CEO Anders Runevad and chairman Bert Nordberg – that has turned Vestas around and cut costs to lift the company’s operating margin to industry-leading levels.

Hans Martin Smith, currently finance chief of Vestas’ Northern and Central European business, will take over by next March.

Operating profit before special items fell 21% to 325 million euros ($376 million) in the quarter, missing the 381 million euros forecast by 16 analysts in a poll compiled by the company.

“With unclear/less favourable onshore demand outlook, rising Chinese competition threat in onshore and input cost headwinds lasting longer, we believe it is still very early to be positive on the company,” JP Morgan analysts said in a research note.