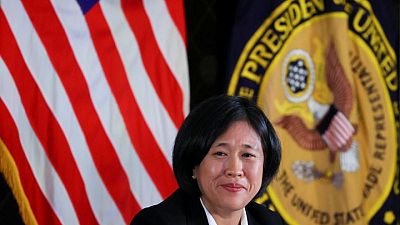 WASHINGTON -U.S. Trade Representative Katherine Tai said on Wednesday that protecting consumers’ rights and privacy must be a top priority in digital trade policy, and that technology companies have responsibilities in shaping the economy.

“It is not hyperbole to say that these companies have the power to affect the lives of people and the direction of our civilization’s development,” Tai said in remarks during a virtual forum on digital trade law hosted by Georgetown University and the Information Technology Industries Council.

“That power requires responsibility and accountability. And these stakeholders have responsibilities in shaping the digital economy,” she added.

Tai said that the issue of data privacy is complex because such standards are set by domestic policymakers in individual countries.

“I think that one of the most important principles … is that we have to respect where domestic policymakers have set their standards, and then to look at how international connections will allow for those domestic standards to be respected as data travels across borders,” Tai said.

Digital and other trade policies should help serve the development needs of emerging economies, she said, and policymakers should continually question long-standing assumptions, including that unrestricted data flows are always better.

A number of developing economies such as India are implementing requirements for cloud services data to be housed locally as a tool to help develop an indigenous digital economy.

Tai said that all sides of the issue should be examined, including whether data flow restrictions increase cybersecurity risk or deny entrepreneurs access to more powerful computing resources elsewhere.

“I truly believe we have more thinking that we need to do on whether data flow restrictions would actually serve the intended goal of facilitating more development,” she said. “At the same time, we should ask whether or not, you know, no data flow restrictions serves the goal as well. Let’s kick the tires on everything.”

Tai also said Western democracies all are expressing concerns about China’s use of surveillance technology for censorship and “digital authoritarianism” that can affect people in other countries.

“We have to ask ourselves hard questions; for example, does digital commerce facilitate imports that are made with forced labor or that exacerbate problems in illegal trade of illegally taken flora and fauna?” she added.