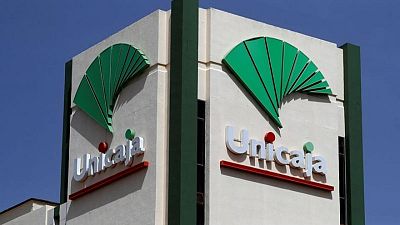 MADRID – Spain’s Unicaja on Wednesday said its recurrent net profit rose 53% year-on-year in the third quarter due to lower provisions and a boost from fees as it integrates Liberbank.

Net profit without accounting gains at the country’s fifth biggest lender by assets reached 54 million euros ($62.5 million) in the July to September period.

Lower lending income however took it below the 63 million-euro forecast from analysts polled by Reuters.

Unicaja reported pro forma figures for the quarter and the same quarter a year ago, allowing the year-on-year comparison to take account of its acquisition of smaller lender Liberbank, which closed at the end of July.

On an accumulated nine-months basis, Unicaja reported a badwill gain – a paper profit made when an asset is bought below its book value – of 1.301 billion euros. Including this gain, net profit rose to 1.395 billion euros.

The accounting gain was generated from Liberbank’s equity of 3.125 billion euros minus fair value adjustments of 994 million euros, leaving an adjusted book value of 2.131 billion euros compared with a purchase price of 830 million euros.

Net interest income (NII), or earnings on loans minus deposit costs, fell 11.2% in the third quarter versus a year ago to 251 million euros, pressured by ultra low interest rates. It was down 5.7% compared to previous quarter, in line with forecasts from analysts polled by Reuters.

Pressure on lending income has driven lenders to seek other growth areas, such as fees, which rose 21% year-on-year in the quarter.

On Wednesday, Unicaja revised up its cost-savings from the acquisition to 210 million euros from initially 192 million euros per year by 2023.

As of end-September, Unicaja’s total cost of risk, which is an indicator of potential future losses, fell to 41 basis points from 58 bps in the previous quarter. It aimed for a cost of risk of around 20 basis points for 2023.