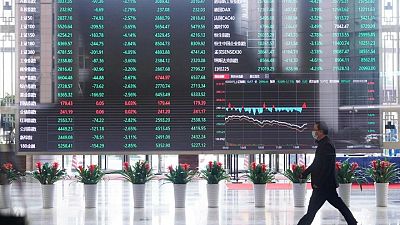 WASHINGTON -World shares climbed on Wednesday as U.S. Treasuries rose and the curve steepened after the U.S. Federal Reserve, as expected, approved plans to begin scaling back its bond-buying stimulus program this month and end it by June.

The pan-European STOXX 600 index rose 0.35% and MSCI‘s gauge of stocks across the globe gained 0.45% as investors digested the decision taken amid a surge in inflation.

The Fed also maintained its assessment that high inflation would prove “transitory” and likely not require a fast rise in interest rates.

The Tokyo bourse was closed for a public holiday while MSCI‘s broadest index of Asia-Pacific shares outside Japan closed 0.03% lower.

John Canavan, lead analyst at Oxford Economics, said while the wording in the Fed’s meeting statement provided “some acknowledgement of the uncertainty regarding the transitory nature of inflation,” the central bank continued to espouse the transitory view.

At the end of its two-day meeting on Wednesday, the Fed said monthly $120 billion purchases of Treasuries and mortgage-backed securities would be trimmed by $15 billion a month starting this month, with plans to end the program in 2022.

“It’s also leading me to think … we can probably expect one, maybe two, rate hikes tops in late 2022, which is less than many had kind of priced in,” said Pursche, adding that he views “a lot of (future Fed) actions are going to be predicated on continued economic improvement and the inflation outlook.”

Boosted by fiscal and monetary stimulus, global stocks have thrived during the economic rebound after the recession triggered by the first wave of COVID-19 infections in 2020. ]

Fed officials are trying to maintain a difficult balancing act by giving the economy as much time as possible to recover while tightening policy soon enough to contain inflation.

Meanwhile, the U.S. job market may have improved enough by the middle of next year to be considered at “maximum employment,” Fed Chair Jerome Powell said on Wednesday after its policy meeting.

Officials did not see “troubling increases” in workers’ wages that might raise the risk of a wage-price spiral developing that could force the Fed to act sooner than expected to contain inflation, he added.

Meanwhile, European Central Bank President Christine Lagarde pushed back on market bets on an interest rate hike as soon as next October, saying it was “very unlikely” such a move would happen in 2022.

Fixed income investors are also eager to find out whether the Bank of England will on Thursday become the first major central bank to raise borrowing costs after the coronavirus crisis.

The dollar index softened after the Fed statement, hitting a session low before reversing some of the losses and fell 0.267%.

Ether, the world’s second-largest cryptocurrency, hit an all-time high on Wednesday, catching up with bitcoin’s rally and riding on news of wider blockchain adoption.

Crude inventories rose by 3.3 million barrels in the week to Oct. 29 to 434.1 million barrels, compared with analysts’ expectations in a Reuters poll for a 2.2 million-barrel rise.