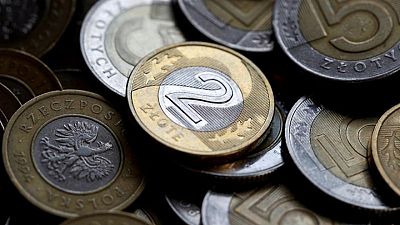 PRAGUE/BUDAPEST – The Polish zloty and Hungarian forint will notch up strong gains against the euro over the next year as most central European currencies return to a path of appreciation, helped by expected rate hikes, a Reuters poll showed on Wednesday.

As inflation hits new highs in central Europe, more policy tightening is expected to lift regional currencies that had shed around 1% in the last month due to a stronger dollar.

“Generally over the next 12 months the zloty should be supported by a tightening of domestic monetary policy,” said Krystian Jaworski, senior economist at Credit Agricole in Warsaw.

“Also the growth prospects should be quite good after this wave of the pandemic finishes.”

The zloty was expected to firm 3.5% from Monday’s closing levels over the next year, to 4.46 versus the euro.

Inflation data on Friday further fuelled Polish rate hike expectations as the CPI soared to an annual rate of 6.8%, and officials and analysts have said it could hit 8%.

The zloty has lagged its regional peers in 2021, with the Polish central bank the last in the region to begin lifting rates, taking a cautious approach until a surprise October hike. It is expected to tighten further at a meeting on Wednesday.

The Hungarian forint is seen firming 3% to 350 per euro in the next year, also supported by rate hikes that the National Bank of Hungary started in June.

“Even though the bank slowed the pace of its rate hikes to 15 basis points, the tightening cycle must have an effect on the forint sooner or later. The small steps add up,” Gergely Suppan, an analyst at Takarekbank, said.

Meanwhile, the Czech crown, the region’s best performer this year, is seen firming 2.3% over the next 12 months as markets price in 125 basis points in hikes for the rest of the year.

In Romania, where political uncertainty continues to cloud attempts to rein in twin deficits, the leu is projected to ease 1.0% in the next year to 4.997 versus the euro.