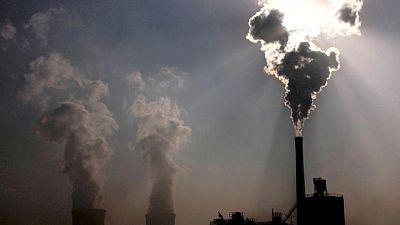 By Muyu Xu and Shivani Singh

BEIJING -China thermal coal futures rebounded nearly 9% on Wednesday after falling for 10 straight days, as the government indicated to pace down price intervention at a meeting earlier in the day, traders said.

Traders took cue from a meeting earlier on Wednesday as the country’s top economic planner, the National Development and Reform Commission, told miners and power plants at a web-based conference that prices should not fall too much too fast, several traders with knowledge of the meeting told Reuters.

The planner stressed that prices in the long-run shall remain at a “reasonable” level.

“The key takeaway from the meeting is that the NDRC signals there is limited space for prices to fall further. That lifted market sentiment,” said one trader.

Ex-mine thermal coal of 5,500 kcal were heard traded at close to 1,000 yuan/tonne on Wednesday, after NDRC last week set an immediate target price at 1,200 yuan.

The planner also called for power firms and miners to secure 100% coal supplies under term contracts, to stave off big price fluctuations, though traders said that would be hard to achieve.

The prices were also supported by an expected jump in fuel use amid forecasts for plunging temperatures.

China’s National Meteorological Center is predicting snowfall in the north and cold winds in the next two days that are expected to cause temperatures over the weekend to plummet in the northwest, southwest and most central and eastern regions.

China coking coal and coke futures also rose on Wednesday, closing up more than 12% and 7%, respectively.

“We believe strong heating demand and restoration of coal-fired power plants could be reason for this rebound after prices plunged from its historic high,” said analysts from ANZ.

They added that should China keep daily domestic output in the 11.5 to 12 million tonnes range along with monthly imports of 20 million to 25 million tonnes, this would be sufficient to meet additional winter demand.

Other analysts warned of more volatility ahead depending on controls issued by the government.

“For example, requiring some output to be reserved for domestic heating and power stations at lower prices will reduce the amount of coal available on the market, so if the winter is a cold one and demand exceeds expectations, another price spike could be in the cards,” Alex Whitworth, head of Asia Pacific Power and Renewables Research at Wood Mackenzie, told Reuters.

China’s key power plants with direct connection to the state railway network were holding 19.1 days worth of thermal coal inventory by October-end, up 5.1 days from a month earlier, Chinese media cited China Railway Group as saying on Wednesday.