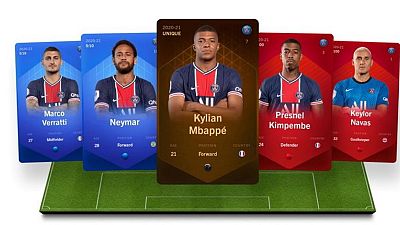 The popularity of the crypto asset, which is a blockchain-based record of ownership of a digital item such as an image or a video, has exploded in 2021, leaving many confused why so much money is being spent on items that do not physically exist.

Sorare, whose latest $680 million funding round was led by Japan’s Softbank, is itself under investigation by the UK Gambling Commission to assess whether its game – where users play with encrypted digital soccer tokens they can buy and sell – amounts to gambling.

“We need to engage with all the regulators, share what we are doing,” Sorare CEO Nicolas Julia told Reuters at Lisbon’s Web Summit. “We need to have some form of protection for the users, and we’re already in conversation with the regulators.”

Asked whether Sorare game’s format, paired with the NFT sector’s exponential growth and tendency to generate extremely rapid returns, could prove hazardous, Julia said: “We have nothing to do with gambling.”

NFTs and other blockchain-based systems are attracting much attention at Lisbon’s tech festival in the wake of Facebook’s announcement that it would invest to create a “metaverse” and rebrand the parent company as Meta.

Created in Paris in 2018, Sorare is an online game where users buy officially licensed cards representing soccer players and build teams which compete with each other, with the outcome based on an algorithm’s assessment of the players’ real-life performance. The cards are traded as NFTs.

Julia told Reuters the startup, keen to move into other team sports including basketball, was in conversation with all the world’s sports leagues and planned to expand into individual games like tennis and golf.

Sorare – which Julia said was on track to reach $200 million in sales in 2021 – has the backing of Softbank, which aims to use it existing relationships with soccer leagues across the Americas to grow the app’s user base in the region.

“(Softbank’s) definitely putting a big focus on NFTs – they like the fact it’s a new market, and we’re the category leaders,” Julia said when asked about the investment bank’s strategy towards the fast-moving and as-yet unregulated field.