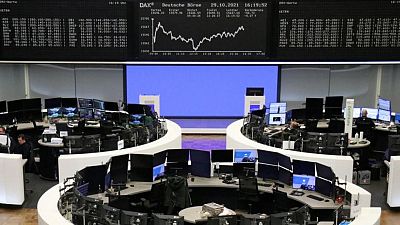 – European shares crept up to a record high on Tuesday as a strong outlook from hearing aid maker Demant supported healthcare stocks, although broader gains were stifled by losses in miners and the prospect of major central bank meetings.

The pan-European STOXX 600 index closed 0.1% higher at 479.71 points, with healthcare stocks leading gains with a 1.3% rise. Denmark’s Demant was among the best performers in the sector after it unexpectedly hiked its annual profit outlook.

Mining stocks led losses, down 2.9% on a slump in iron ore and copper prices, as loose supply conditions and a poor demand outlook for China rattled metal markets. [IRONORE/]

Antofagasta and ArcelorMittal SA were among the worst performers in the sector.

The STOXX 600 had closed at a record high on Monday, carrying over strong gains from October on the back of positive earnings and a jump in bank stocks fuelled by expectations of a rate hike by the European Central Bank next year.

“The environment of higher inflation and higher yields favours certain corporates, but it’s uncertain for others, which leaves you in a very volatile market,” said Bert Colijn, senior economist at ING.

About 166 companies of the STOXX 600 have reported quarterly earnings so far and 65.7% have topped profit estimates, according to Refinitiv IBES data. In a typical quarter, 52% beat estimates.

Focus now turns to a decision by the Fed on when it plans to begin tapering its massive stimulus measures, as well as a decision from the Bank of England later in the week. Both banks are expected to outline measures to contain a recent spike in inflation.

Weighing on UK’s blue-chip FTSE 100, the world’s largest online betting group Flutter Entertainment dropped 7.7% after trimming its full-year forecast due to unfavourable sports results and a temporary closure of its Dutch operations.

London-based Standard Chartered slumped 7.8% despite reporting a doubling in profit for the third quarter. The bank said it had $4.2 billion in exposure to China’s real estate sector, where China Evergrande Group has been grappling with an enormous debt pile.