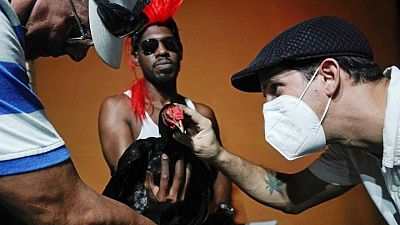 HAVANA – Artists in Cuba have announced a new spin on the fast-expanding world of crypto art for online collectors, with plans to sell 1,492 digital portraits of Cubans through non-fungible tokens (NFT) to kick off the “CryptoCuban Social Club.”

NFTs are a type of digital asset which use blockchain to record the ownership of items such as images, videos and other collectibles. Their roaring popularity has baffled many but the explosive growth shows no sign of abating.

The artists in September began photographing Cubans in creative poses and dress, with a goal of 1,492 unique portraits in all, a nod to the year – 1492 – when Christopher Columbus first arrived on the island.

Buyers of the digital portraits can interact with the “CryptoCubans” after the launch in December, via online platforms and eventually, live concerts and parties in Cuba. That will create a unique “community that will connect our music and culture with the rest of the World,” the artists said.

The portraits and people combine the warmth of Cuban society with a digital world that project co-founder Gabriel Guerra said can come across as cold and distant.

“The stories that people have told us literally encompass Cuban society, our daily life, our pain, our dreams,” Guerra said in an interview.

Cuba, a Communist-run country known for its antiquated cities and cars and spotty internet service, has become a growing hotspot for crypto art.

Photographers and artists like Guerra use digital crypto platforms to access markets and audiences that previously would have required artists to leave the country, or a buyer to hop on a flight to the island.

After the project’s official launch in December, 20% of the proceeds, in cryptocurrency ether, will be given to the portrait subjects, allowing 1,492 Cubans access to the “cryptoworld,” according to the project’s website.

The CryptoCuban Social Club promises that buyers of its NFTs will own much more than a simple .jpg, or digital image, gaining access instead to a community and a “live-changing project.”

Cuba said in August it would authorize the use of cryptocurrency, one of several Latin American countries to recently show interest in regulating digital currencies.