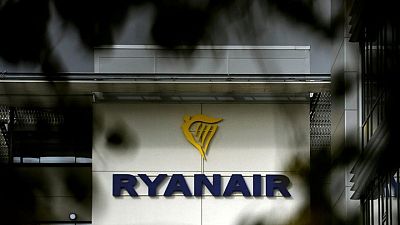 By Conor Humphries and Danilo Masoni

DUBLIN -Ryanair is planning to delist from the London Stock Exchange in coming months due to a fall in trading volumes there, executives said on Monday, dealing another blow to London’s status as a global financial center after Brexit.

The Irish airline’s move comes after its British shareholders’ voting rights were restricted post-Brexit and follows miner BHP saying in August it would do away with its dual-listed structure and make Sydney its main listing.

“I think we will probably delist sometime in the next six months,” Ryanair CEO Michael O’Leary told a conference call.

Brexit had pushed EU stock ownership of the company below 50% – given the UK is no longer part of the bloc – and the “European Commission wants us to be seen to be taking action,” O’Leary said.

Ryanair had said in 2020 that UK nationals, like other non-EU nationals, would from January 2021 no longer be permitted to acquire its ordinary shares – a decision taken to ensure the airline remains majority EU-owned and retains full licensing and flight rights in the bloc after Brexit.

Ryanair has a primary listing on Euronext Dublin and its American Depository Receipts (ADRs) are listed on the U.S. Nasdaq. In 2012 it downgraded its listing on the LSE from premium to standard – hitting daily turnover on the LSE with most volume already migrating to European exchanges.

Monthly trading volume in Ryanair’s London-listed shares averaged 20.5 million in the 10 months to end-October, down almost 68% from the average turnover in 2020, according to Reuters calculations based on Refinitiv data.

Ryanair trading volumes in Dublin have also fallen this year but to a lesser extent. In the 10 months to end-October monthly volume there averaged 35.5 million, down 44% on 2020.

Another high-profile delisting would come as listings on the LSE have fizzled and its main market has underperformed. European stocks have outperformed the British blue chip index by nearly 9 percentage points this year, according to Refinitiv data.

“Many firms may be looking at the FTSE and the sheer underperformance and the high costs involved in listing here,” said a sales trader at a local brokerage.

Having two share trading venues, one each in the UK and EU, is considered expensive and particularly onerous for airlines, whose operating licences to fly between destinations within the bloc are reserved for operators that are majority owned and effectively controlled by EU, EEA or Swiss nationals.

“The migration away from the LSE is consistent with a general trend for trading in shares of EU corporates post Brexit,” the airline said in a statement alongside its six-monthly results.

Britain is pushing to keep the City of London as a global financial centre in the aftermath of Brexit, which has largely cut off the UK financial sector from clients in the bloc.

The bulk of trading in euro-denominated shares shifted overnight from London to Amsterdam after Britain fully left the EU on Dec. 31, 2020.