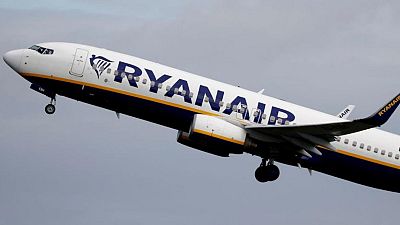 DUBLIN – Ryanair on Monday reported its first quarterly profit since before COVID-19, but downgraded its annual forecast to a loss as it prepared to slash winter prices to build momentum for what it believes will be a bumper summer next year.

Europe’s largest budget airline, which flew more passengers this summer than any European rival, made a profit of 225 million euros ($260 million) for the three months to the end of September, marking its first quarterly profit since the final three months of 2019.

But the Dublin-based airline said it expected a loss of between 100 million and 200 million euros for the financial year that ends on March 31, a downgrade from its July forecast of “somewhere between a small loss and breakeven”, citing fare discounting and higher fuel costs.

“There is no doubt that the remainder of the fiscal year will be challenging, the winter will be tough” Group Chief Executive Michael O’Leary told investors.

But keeping prices low and passenger numbers high over the winter will “set us up strongly for a very strong recovery” in the summer of 2022 when ticket prices should return to pre-COVID levels “if not better”, O’Leary said.

Flights for next summer are booking at prices around 5% higher than 2019, he said.

That should help lift the airline to an annual profit in its next financial year, which ends in March 2023, he said.

The contraction of European short-haul capacity by up to 20% from pre-COVID levels next year and around 10% the following year will allow for “dramatic market share gains,” he added.

Ryanair carried 39.1 million passengers in the six months ended September, more than double the number in the period last year but 54% fewer than the same months in 2019.

O’Leary said Ryanair hoped to fly 103-104 million passengers in the year to March, compared to 149 million in the year before the pandemic.

Ryanair’s after-tax loss of 48 million euros for the six months to September, which included a 273 million loss in the first quarter, was slightly worse than the 43 million euros forecast in a company poll of analysts.

Ryanair announced on Monday that it was looking at delisting from the London Stock Exchange in coming months due to a fall in trading volumes there after Brexit forced it to impose restrictions on British-owned shares.

O’Leary also ramped up a war of words with his main aircraft supplier Boeing, saying the planemaker was “delusionary” for imposing a double-digit percentage price increase for 737 MAX 10 planes, which he said had led to the collapse of talks earlier this year.

He said he did not think Boeing would meet a target of delivering 65 of an existing order of 737 MAX200 jets by April, but was “reasonably confident” they would arrive in time for next year’s summer peak.

A Boeing spokesperson said it valued Ryanair’s business but that it would continue to be disciplined and make decisions that made sense for the company.