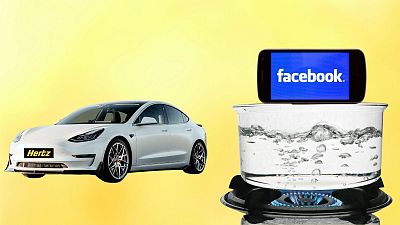 Hertz announced on Monday that it will buy 100,000 electric vehicles from Tesla, one of the largest purchases of battery-powered cars in history.

The news of the deal triggered a rally in Tesla's stock, driving the carmaker's market value over the $1 trillion (€865.5 billion) mark for the first time.

The purchase by one of the world's leading rental car companies reflects its confidence that electric vehicles are gaining acceptance with environmentally minded consumers as an alternative to fossil fuel driven vehicles.

The Teslas are already arriving at the company's sites and should be available for rental starting in November, Mark Fields, Hertz' interim CEO, told the Associated Press.

Hertz said in its announcement that it will complete its purchases of the Tesla Model 3 small cars by the end of 2022.

Fields wouldn’t say how much Hertz is spending for the order. But he said the company has sufficient capital and a healthy balance sheet after having emerged from bankruptcy protection in June.

It also ranks at the top of the list of electric vehicle orders by a single company. In 2019, Amazon ordered 100,000 electric delivery vans from Rivian, a startup manufacturer of electric vans, pickup trucks and SUVs it invested in.

British lawmakers grilled Facebook on Thursday over how it handles online safety as European countries move to rein in the power of social media companies.

Facebook's head of safety said the tech giant supports regulation and has no business interest in providing people with an “unsafe experience”.

Representatives from Google, Twitter and TikTok also answered questions from a parliamentary committee scrutinising the British government’s draft legislation to crack down on harmful online content.

Governments on both sides of the Atlantic want tougher rules for protecting social media users, especially younger ones, but the United Kingdom's efforts are much further along than the US.

UK lawmakers are questioning researchers, journalists, tech executives and other experts for a report to the government on how to improve the final version of the online safety bill.

The European Union is also working on digital rules.

Antigone Davis, Facebook’s head of global safety who addressed the British lawmakers via video conference, defended the company's handling of internal research on how its Instagram photo-sharing platform can harm teens, including encouraging eating disorders or even suicide.

“Where does the buck stop?” asked Damian Collins, the lawmaker who chairs the committee.

“It’s a company filled with experts, and we all are working together to make these decisions,” Davis said.

Davis said Facebook is largely supportive of the UK's safety legislation and is interested in regulation that gives publicly elected officials the ability to hold the company accountable.

She said she doesn’t agree with critics that Facebook is amplifying hate, largely blaming societal issues and arguing that the company uses artificial intelligence to remove content that is divisive or polarising.

Facebook whistleblower Frances Haugen told the UK committee this week that the company’s systems make online hate worse and that it has little incentive to fix the problem. She said time is running out to regulate social media companies that use artificial intelligence systems to determine what content people see.

Haugen was a Facebook data scientist who copied internal research documents and turned them over to the U.S. Securities and Exchange Commission.

British lawmakers are still grappling with thorny issues such as ensuring privacy and free speech and defining legal but harmful content, including online bullying and advocacy of self-harm. They're also trying to get a handle on misinformation that flourishes on social media.

As cryptocurrency markets have rallied sharply in recent weeks, ether is up more than 60% since its late September trough.

"It wouldn't surprise me if we go blasting through in European and U.S. trade," Chris Weston, research head at Melbourne-based broker Pepperstone, told Reuters.

"This is a momentum beast at the moment, and it looks bloody strong."

A recent technical upgrade to the Ethereum network seemed to have helped, he added.

"A lot of the time, with these technological upgrades and bits and pieces, this is news that fuels the beast, it's fodder for people to say, 'This is what we bought in for,' and as soon as it starts moving, it's like a red rag to a bull, people just go and buy."

Among the biggest recent movers in cryptocurrencies, however, is meme-based cryptocurrency shiba inu, whose price has rocketed about 160% this week, and is the world's eighth largest token.

Shiba inu is a spinoff of dogecoin, itself born as a satire of a cryptocurrency frenzy in 2013, and has barely any practical use.