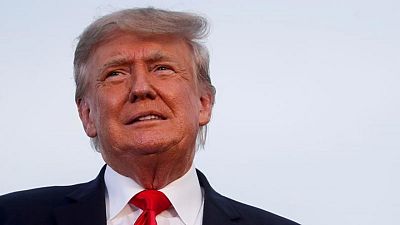 By Echo Wang and Krystal Hu

– Donald Trump’s social media deal partner took advice from a group of China-based businessmen who in the past tried their hand at businesses ranging from Spanish wine to Korean women’s fashion, and at one point had their “integrity” questioned by U.S. regulators.

The chief executive of Digital World is Patrick Orlando, who has acted as the special purpose acquisition company’s (SPAC) public face. Digital World touted ARC in one filing as adviser that had contacts in government, corporate, investment and advisory worlds and would help it “get access to quality deal pipeline.”

A review of regulatory filings shows that while ARC has been actively involved in the creation of SPACs, especially over the past two years, its executives ran into trouble with the U.S. Securities and Exchange Commission (SEC) in 2017. The regulator sued to block the initial public offerings of three companies where the four men had leading roles, accusing them of misrepresenting their connections, misstating the nature and scope of their businesses and failing to cooperate with regulators.

The executives did not show up at hearings, and a judge entered default judgment in the regulator’s favor, regulatory filings show. The result was a rare so-called stop order, which prohibited the executives from taking their companies – Go EZ Corp, Arc Lifestyle Group Inc and Nova Smart Solutions Inc – public.

Respondents are in default for failing to file an answer, appear at the hearing, or otherwise defend the proceeding,” wrote Cameron Elliot, an SEC Administrative Law Judge at the time. Their actions “call into question management’s integrity.”

Elliot, who is now an administrative law judge at the U.S. International Trade Commission, told Reuters he did not have any additional information about the case.

Camarero, one of the managing partners of ARC Group, was CEO of Nova Smart. In an email to Reuters, he said he cooperated with regulators, taking their calls and providing them with his email communications. But when they asked him to fly to Washington, he couldn’t for “personal and business reasons.”

“The process was getting very troublesome and consuming my time,” he wrote in an email. He said he decided to try to run the company privately but eventually had to liquidate it. “Obviously, I was a collateral damage,” he said.

Reuters could not determine what Trump or his company, Trump Media & Technology Group, knew of the ARC Group bankers’ involvement in Digital World or their past troubles with regulators.

Christina Thoma, a partner at law firm Mayer Brown LLP and former SEC senior adviser who was not involved in the Trump SPAC deal, called the stop order an “extreme” step.

“Most enforcement actions brought against companies for having materially false or misleading disclosure don’t result in a stop order, as the SEC has the ability to seek different penalties,” she said. Perrie Weiner, securities litigation attorney with Baker McKenzie, said the judgment could become an issue if the executives ever became subject to another SEC probe or investor lawsuits.

However, Weiner noted that the judgment against the four dealmakers was not a finding of fact. “It’s like if you get a moving violation and don’t show up for your court hearing, and they issue a judgment against you for non-appearance and non-cooperation.”

Regulatory filings and investor presentations prepared by ARC Group show that the firm has thrived in recent years, helping clients overcome investment barriers into the United States that Trump erected for Chinese investors.

It went from one to 15 offices around the world, completing $1.8 billion of deals, according to its website. The firm also said it created and advised more than 30 SPACs, the vast majority of them in the United States, according to an investor presentation.

Digital World shares are up more than 600% since the deal a week ago, and ARC Group seized on the rally to promote its business in China. It sent a Mandarin translation last week of a Reuters story on the merger to subscribers of its channel on Chinese messaging app WeChat.

“Trump’s company merges with our SPAC, shares jumped 400%!” it wrote.