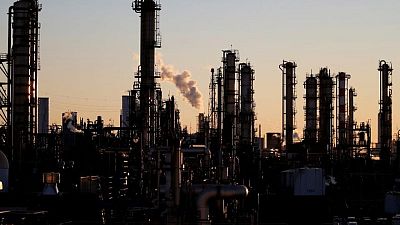 By Daniel Leussink and Kantaro Komiya

TOKYO -Japan’s factory output shrank for the third straight month in September as the auto sector was hit by a persistent global supply shortage, raising the risk of an economic contraction in the third quarter and throwing the recovery into doubt.

Output disruptions across Asia and slowing growth in China have clouded the outlook for the world’s third-biggest economy, which has depended heavily on exports to boost growth as the COVID-19 pandemic hurt domestic demand.

“Shipments of capital goods declined. That suggests business investment has not been growing.”

Factory production slumped 5.4% in September from the previous month, official data showed on Friday, hurt by falling output of cars as well as general-purpose machinery.

That meant output shrunk for the third consecutive month, after falling 3.6% in August and 1.5% in July.

It was the largest month-on-month decline since a 6.5% drop in May, and weaker than a 3.2% loss forecast in a Reuters poll of economists.

Seven out of eight Japanese automakers are seeing global output drop in September, as the global parts and chip shortage weighed on the sector.

Toyota Motor said on Thursday it saw global output slumping 39.1% in September from a year earlier, while cuts by automakers are also starting to affect suppliers.

Friday’s data showed output of cars and other motor vehicles lost 28.2% from the previous month in September, falling for the third straight month, while its shipments sank 32.5% month-on-month.

The data showed overall inventories rose 3.7% from the previous month, their largest gain since comparable data became available in 2015, which is likely to have offset some of the weakness in third-quarter output and possibly exports.

The government is due to release a preliminary gross domestic product estimate for July-September on Nov. 15.

That contraction is “posing clear downside risks to our view that quarterly gross domestic product growth was zero last quarter,” he said in a note.

Friday’s data showed manufacturers surveyed by the Ministry of Economy, Trade and Industry (METI) expected output to rebound ahead, forecasting a 6.4% gain in October and 5.7% in November.

A government official warned output may not expand as much as forecast, as worries over chip and parts supply shortages persisted.

However, Norinchukin’s Minami said a recovery in service-sector sentiment following the government’s easing of coronavirus restrictions was likely to support the economy in the coming months.

Separate data showed the jobless rate held steady from the previous month at 2.8%, while an index gauging job availability gained slightly to 1.16 from 1.14 in August.

Meanwhile, the consumer confidence index, a gauge of general households’ sentiment on their income and spending, rose to 39.2 in October, hitting the highest level since May 2019.

On the inflation front, the core consumer price index for Tokyo, which includes oil products but excludes fresh food prices, rose 0.1% in October from a year earlier, up for a second straight month, government data showed.