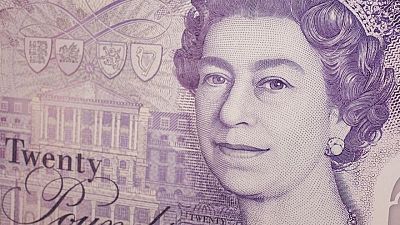 LONDON -Sterling dropped against a stronger dollar on Friday but recovered some of the previous session’s losses against the euro and was set for a small weekly gain as market attention focused on the possibility of a Bank of England rate hike next week.

The dollar was up around 0.9%, jumping as government bonds rose and traders saw new inflation reports as challenging major central banks to pull back on asset purchases more quickly than planned.

The pound had fallen against the euro in the previous session after the European Central Bank meeting kept investors expecting a rate hike in 2022 and did not calm their fears about surging inflation, leading to a jump in euro zone bond yields and a stronger euro.

The pound’s moves this week have been driven by speculation over whether the Bank of England will hike rates at its meeting on Nov. 4, or whether concerns about the possible longer-term hit to economic growth stemming from supply chain disruptions and Brexit will cause the bank to hold back.

Markets were pricing in a 62% chance of a hike at next week’s meeting, up from a 56% chance in the previous session, according to data from CME.

“Our suspicion is that the pound should find some support as we approach Thursday’s BoE meeting, and with a lot of positives in the price for the EUR, the 0.8500 resistance should hold for now,” wrote ING FX strategists in a note to clients.

Deutsche Bank strategists said in a client note on Friday that they had changed their view and now expect the BoE to deliver its first post-pandemic rate hike at next week’s meeting.

“Ultimately, we think a weaker supply outlook combined with surging and stickier inflation will provide the majority of the MPC (Monetary Policy Committee) enough ammunition to pull the trigger on a first rate move,” Deutsche Bank said.

The British public’s expectations for inflation over the next year jumped to the highest since 2008 this month, Citi said earlier this week, based on its monthly survey with pollsters YouGov.

A weekly auction of British government six-month Treasury bills – a form of short-term debt – saw the highest yield since April 2020.