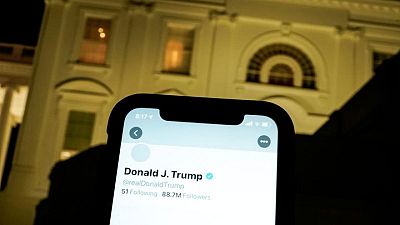 WASHINGTON – Former U.S. President Donald Trump cannot fight his suspension from Twitter in a Florida federal court, but instead must abide by the social media company’s terms of service and sue in California, following a judge’s ruling.

U.S. District Judge Robert Scola in Miami said in a written order late on Tuesday that Trump was bound by a “forum selection clause” in Twitter Inc’s terms of service, which mandates that certain lawsuits against the company be heard by a federal judge in the Northern District of California.

Trump lost his social media megaphone this year after the companies said he violated their policies against glorifying violence.

A mob of his supporters launched a deadly assault on the U.S. Capitol on Jan. 6 after a Trump speech repeating his false claims that his election defeat was the result of widespread fraud, an assertion rejected by multiple courts, state election officials and members of his own administration.

Trump’s lawyers had argued his Twitter account was a “public forum” and “government entity,” and therefore fell under an exception to Twitter’s forum selection clause.

John Coale, a lawyer for Trump, said in an interview that he was not surprised by the ruling because forum selection clauses are often held to be binding.

“We thought this was a longshot from the beginning,” Coale said. “We expected there was a decent shot we would end up in California.”

Earlier this month, a different judge transferred a lawsuit Trump brought against Alphabet Inc’s YouTube, which involves related arguments, from Florida to California on similar grounds.

The lawsuits, filed in federal court in Miami, allege the California-based social media platforms violated the right to freedom of speech guaranteed by the First Amendment of the U.S. Constitution.