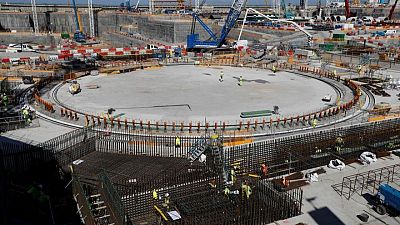 LONDON – Britain has pledged up to 1.7 billion pounds ($2.34 billion) to help a new large-scale nuclear project get off the ground in the next few years, budget documents showed on Wednesday.

Some politicians have expressed concerns about China’s involvement in Britain’s nuclear industry and the government on Tuesday also launched a new funding model it hopes will entice more British backers to new projects.

Britain aims to reach net zero emissions by 2050, which will require a huge increase in low-carbon power generation such as wind, solar and nuclear, but new nuclear projects have struggled to secure funding due to the large up-front costs.

The government said it would “provide up to £1.7 billion of new direct government funding to enable a final investment

decision in a large-scale nuclear project this Parliament, subject to value for money and approvals,” the documents showed.

France’s EDF is building Britain’s first new nuclear plant in more than two decades, Hinkley Point C, with backing from China’s CGN, which is expected to cost 22 billion-23 billion pounds. Britain has plans to build a second new plant, Sizewell C, in which CGN also has a 20% stake in the development phase.

The government document said Britain is in active negotiations with EDF over the Sizewell C project.

Under the regulated asset-based (RAB) model, companies building new plants would be paid during the construction phase, cutting their development risk and allowing them to secure cheaper financing for the projects.

The RAB model would also require that households pay a small amount each month for new plants while they are still being constructed.