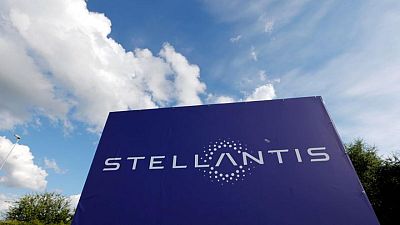 MILAN -Stellantis, the world’s fourth largest automaker, on Thursday reported a 14% fall in third-quarter revenue on a pro-forma basis after semiconductor shortages cut planned quarterly production by 30%, or 600,000 vehicles.

Chief Financial Officer Richard Palmer said the company was seeing a “moderate” improvement in chip supply in October, however, and expected that to continue through the fourth quarter.

This led it to expect a moderate improvement in shipments in the final part of this year, Palmer said.

Stellantis’ hit from the chip shortage was echoed by rival Volkswagen, which cut its outlook for deliveries, toned down sales expectations and warned of cost cuts as it reported lower-than-expected quarterly operating profit.

Stellantis, formed at the beginning of the year from the merger of Fiat Chrysler and France’s PSA, confirmed its full-year target for an adjusted operating profit (EBIT) margin of around 10%.

The forecast, which was raised in August, assumes no further deterioration in semiconductor supply and no further significant lockdowns in Europe or the United States.

“We believe this is achievable,” said Martino De Ambroggi, an analyst at broker Equita, adding: “the industrial relaunch story with jumbo synergies (from the merger) remains unchanged.”

Milan-listed shares in Stellantis were up 1.2% at 0750 GMT, outperforming a 0.2% rise for Italy’s blue-chip index.

Revenue amounted to 32.55 billion euros ($37.8 billion) in the third quarter, short of analyst expectations of 33.02 billion euros in a Reuters poll.

“The level of chip shortage was probably slightly higher than what we had expected when we last spoke to the market in August,” Palmer said, adding the full-year total toll of lost production would top a previous forecast of 1.4 million units.

“Visibility on semiconductors continues to be a difficult subject for the industry,” he added.

Stellantis’ consolidated shipments fell 27% year on year on a pro-forma basis in the third quarter to 1.13 million vehicles.

Lower volumes more than offset an improved vehicle mix and positive net pricing – which accounted for 2.4 billion euros and 1.6 billion respectively of quarterly revenues – after recent vehicle launches, including electrified ones, the company said.

“We see positive pricing across all regions,” the CFO said, adding he saw good progress on post-merger synergies and cost management.

Stellantis, however, cut its full-year industry growth forecasts for North America, South America and an enlarged European area, while improving them for the Middle East and Africa. It kept them unchanged for India, the Asia Pacific and China.