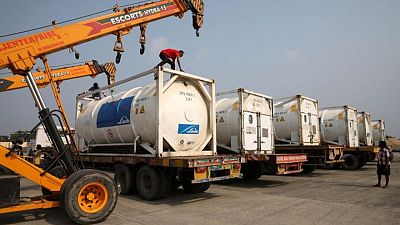 -Linde, the world’s largest industrial gas company, on Thursday raised its 2021 earnings forecast for the third time this year and set goals for cutting carbon emissions.

The U.S.-German supplier of gases such as oxygen, nitrogen and hydrogen said it now expects adjusted earnings per share (EPS) to increase by 28% to 29%, up from an earlier predicted range of between 23% and 25%.

Linde said quarterly adjusted earnings per share rose 27% to $2.73, above a $2.66 forecast by analysts polled by Refinitiv.

Linde said its new goals included a 35% cut in absolute emissions by 2035 and becoming carbon neutral by 2050.

It has signed deals this year with Infineon Technologies, Snam and Daimler’s truck business to develop clean, or blue, hydrogen projects.

Countries are looking to curb greenhouse gases and scale up renewables across polluting sectors in an effort to meet the European Union’s net-zero emissions goal by 2050.

“We firmly believe that countries will pursue the path of blue hydrogen because that is the most meaningful way to kind of move forward on this transition,” Linde Chief Operating Officer Sanjiv Lamba said on a conference call.

Lamba will succeed Steve Angel as chief executive from March 1, 2022, while Angel will take over as chairman, Linde said on Monday.